Skip to main content
Advanced search
Question
A farmer wants to fence off his four-sided plot of flat land. He measures the first three sides, shown as $\vec{A}$, $\vec{B}$, and $\vec{C}$ in Figure 3.60, and then correctly calculates the length and orientation of the fourth side $\vec{D}$ . What is his result?
Question Image
Question by OpenStax is licensed under CC BY 4.0.
Final Answer
$2.97 \textrm{ km, } 22.2^\circ \textrm{ W of S}$
Solution Video 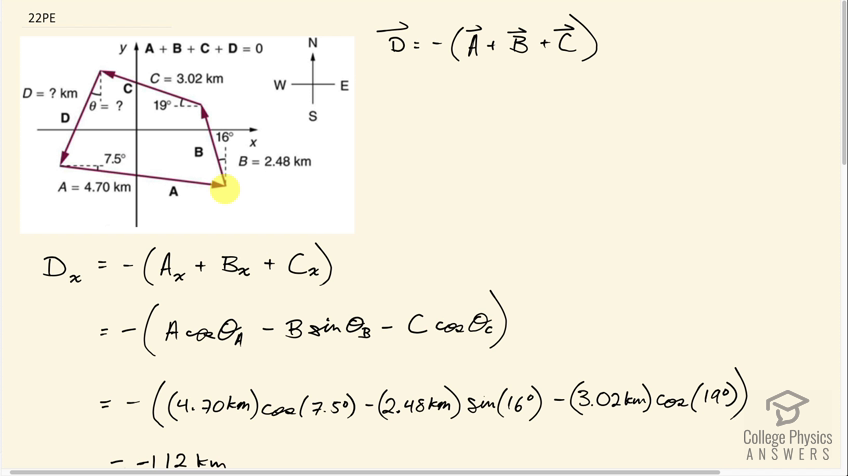 Why are you switching between cos and sin? Is X not always supposed to be cos value and Y always Sin?

Hello, thanks for the question. A little bit of backstory will help here: $\sin$ always gives the length of the opposite side divided by the hypotenuse in a right angled triangle. This means $\sin$ can be used to find the opposite side length by multiplying the hypotenuse length by the sine of the angle opposite the side we want to find. That's what's being done to find $B_x$ here. $\sin$ works in this case since the information we're given includes the angle opposite the horizontal side. There's no rule about "$\cos$ is for $x$ and $\sin$ is for $y$" although I can understand why it would seem that way, only because lessons are usually done with a right triangle where the angle between the horizontal leg and the hypotenuse is given. If the angle between the vertical leg was given along with the hypotenuse, then $\sin$ would be used to find the horizontal leg.

In reply to Why are you switching… by jahansherkhan

Why are we finding everything based on Dx, Ax, Bx, and C, but not Dy,Ay,By, and Cy?