Skip to main content
Advanced search
Question
A football quarterback is moving straight backward at a speed of 2.00 m/s when he throws a pass to a player 18.0 m straight downfield. (a) If the ball is thrown at an angle of $25^\circ$ relative to the ground and is caught at the same height as it is released, what is its initial speed relative to the ground? (b) How long does it take to get to the receiver? (c) What is its maximum height above its point of release?
Question by OpenStax is licensed under CC BY 4.0.
Final Answer
Solution Video 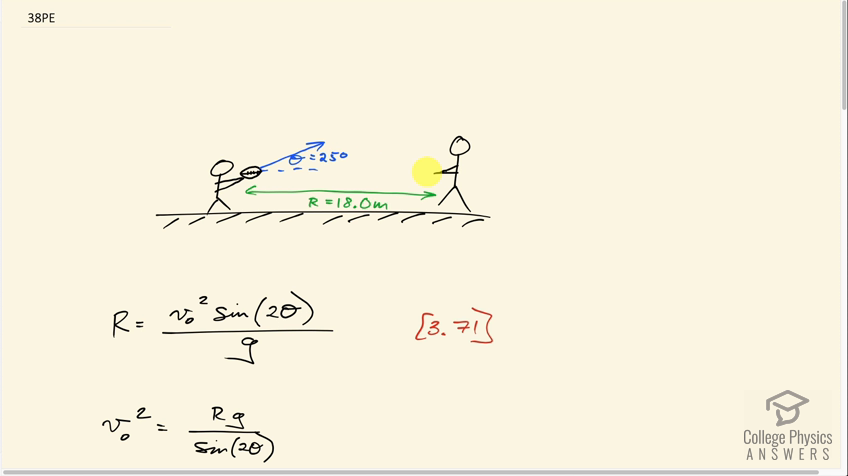 Video Transcript
This is College Physics Answers with Shaun Dychko. This quarterback throws the football at an angle of 25 degrees, and then it travels to the receiver who catches it at the same height, 18 meters away. So the range of this football is 18 meters. Because that's the horizontal displacement. We're going to answer in part A, what is the initial speed and then in part B, we’ll figure out how long it takes to travel this arc. And then in part C, figure out the maximum height that the ball reaches along the arc. Okay, so this range formula, equation 71 in chapter three, tells us that the range is the initial speed squared times sine of 2 theta.theta being this angle with respect to horizontal, divided by acceleration due to gravity. And we can solve this for v naught. First we’ll multiply both sides by g over sine two theta. And then switch the sides around, then we get v naught squared is r g over sine two theta. And then we’ll take the square root of both sides to solve for the initial speed v naught. And this is the speed of the ball with respect to the ground. The fact that the quarterback is moving backwards doesn't really matter. Because it's the ball’s speed that we're concerned with, and sure enough the movement of the quarterback does affect the ball's speed. But whatever the ball's speed is will be given by this formula with respect to the ground. And that's what the questions asking for was the ball’s speed with respect to the ground. Okay, so we plug-in 80 meters for the range, 9.8 meters per second squared for acceleration due to gravity. And divide it by sine of two times the launch angle of 25 degrees, which gives 15.2 meters per second after we take the square root of all that. Now part B, we're going to figure out what the time is in the air by using this formula. This is equation 53, and the initial position we’ll take to be zero, horizontally speaking. And there is no acceleration in the x-direction. So this term is zero, leaving us with the final horizontal position. Which is the range is the x-component of the velocity, multiplied by time. Now the x-component of the velocity is the initial speed multiplied by cosine of its launch angle. Because if I draw this triangle here, where this is v naught it's going to have an x-component here, v naught x-component and v naught y-component. And this is the angle theta in here, 25 degrees. And we just figured out what v naught is in part A, 15.2 meters per second. So we can figure out the x-component of this initial velocity by multiplying by cosine of theta. Because this is the adjacent leg of this right triangle. Okay, where are we? Right here. So I substitute v naught cos theta in place of v x, and I do that here. And then we solve for t, by dividing both sides by v naught cos theta. So the time in the air, is the range divided by the initial speed, times cos theta. So that's 18.0 meters divided by 15.1758 meters per second, times cos 25 degrees. Giving us 1.31 seconds. And part C says, what is the maximum height of the ball? Well, we know that the final y-component of its velocity will be zero when it's at the peak. And this formula 77, says that the final velocity squared is the initial velocity minus two times acceleration due to gravity, times the final height minus the initial height. The initial height we’ll also take to be zero. Because it's asking us what is the maximum height with respect to its initial height. So, if we take initial height to be zero. That'll make this term disappear, and we can substitute for initial velocity in the y-component by saying it's v naught sine theta. Because this is the opposite leg of this triangle. So zero gets put in place of v y squared. v naught sine theta gets put in place of v naught y. And that's all squared minus two g. Times y minus zero. And this two g y can be moved to the left hand side by adding to g y after multiply through there. And then we have two g y equals v naught sine theta, all squared. And then divide both sides by two g to get the maximum height. So it's v naught sine theta, all square divided by two times g; So it’s 15.1748 meters per second, times sine 25, all squared divided by two times 9.8 meters per second squared for maximum height of 2.10 meters.