Skip to main content
Advanced search
Question
Unreasonable Results (a) Find the maximum range of a super cannon that has a muzzle velocity of 4.0 km/s. (b) What is unreasonable about the range you found? (c) Is the premise unreasonable or is the available equation inapplicable? Explain your answer. (d) If such a muzzle velocity could be obtained, discuss the effects of air resistance, thinning air with altitude, and the curvature of the Earth on the range of the super cannon.
Question by OpenStax is licensed under CC BY 4.0.
Final Answer 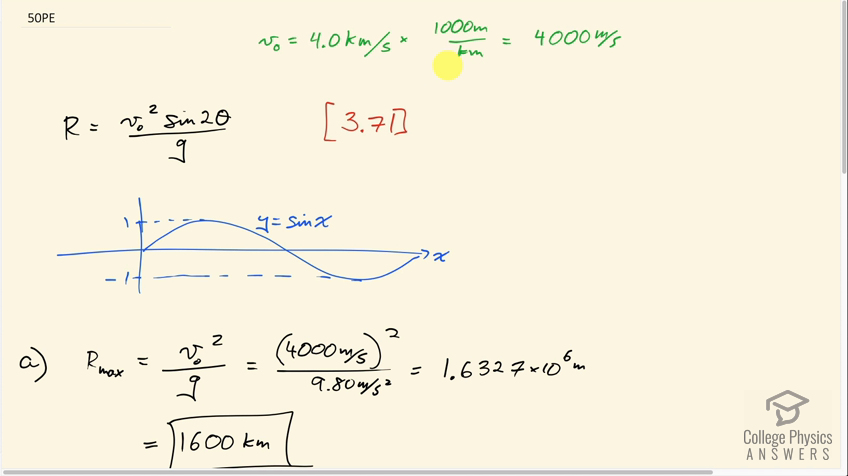 Video Transcript
This is College Physics Answers with Shaun Dychko. We suppose a super cannon has a muzzle velocity of four kilometers per second, which when we multiply by 1000 meters for every kilometer, we see is 4000 meters per second. The range formula from equation 71 in chapter three says, that the muzzle velocity squared, times sine of two times the launch angle, divided by acceleration due to gravity is the range. Now since the sine function has its own range from positive one to negative one, that means the maximum that this factor can possibly be is one. So this is a graph of y equals sine x, and it has a maximum of one. So we can plug-in the number one here to get the maximum range. So maximum range is v naught squared over g. So that's 4000 meters per second squared, divided by 9.8 meters per second squared. Which is this number, which is 1600 kilometers, that is very far. And part B asks, does the formula apply? And it does not apply very well because it's based on some assumptions that are not true in this scenario. And in part C, we list those assumptions. There's a flat earth assumption in that equation, but the curvature of the Earth can't be ignored on this large scale. So the range will actually be a little bit longer than the formula would say. Because the earth, the ground sort of falls away, you could say. If this is the surface of the earth here, and the projectile’s launched straight horizontal say. Then there will be some distance downwards that it can fall, because of the curvature of the earth. And in doing so, will eventually go further along the earth than it would have the earth being flat. So if, well, let me just leave it at that. Okay, air resistance is an issue, equation 13 in chapter five. All the stuff doesn't matter for this purposes here, we can just say that the drag force is proportional to the speed of an object going through the air. The speed squared, I should say. And so that means, but this you know exponent two means that this has this drag force, has a very strong dependency on the speed. And so is such a high speed, drag force will be very significant and range will actually be much shorter than the formula would suggest. And another assumption that's not true is this constant air density assumption. And air density decreases with height and so the range will be longer as a result of this effect. And you can see the density is contained in this drag force formula. But I think the overall issue with this range formula in this question, is that this drag force will be very large. And the range will in the end even though it's longer because of the curvature, longer because of the air density decreasing with height, it will in fact be much shorter as a result of this large drag force.