Skip to main content
Change the chapter
Question
Find the following for path D in Figure 3.58: (a) the total distance traveled and (b) the magnitude and direction of the displacement from start to finish. In this part of the problem, explicitly show how you follow the steps of the analytical method of vector addition.
Question Image
Question by OpenStax is licensed under CC BY 4.0.
Final Answer
Solution Video 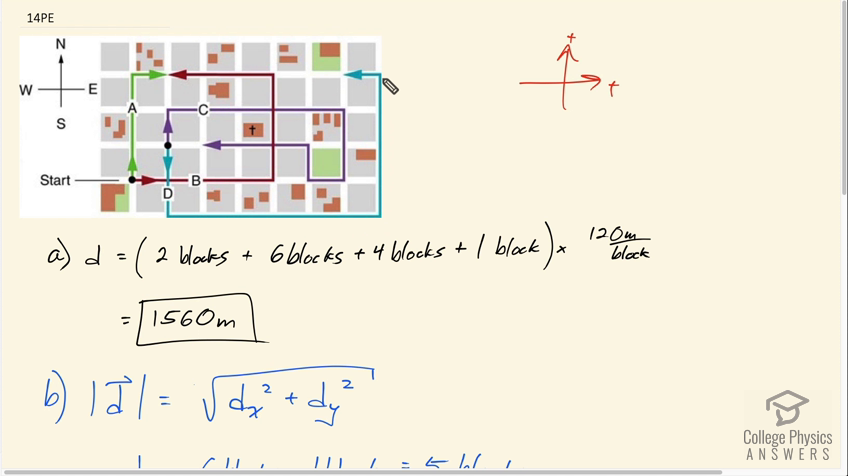 This is College Physics Answers with Shaun Dychko. In Part A of this question, we're going to figure out the distance traveled starting here along Path D until we get to here. Then in Part B, we'll find the displacement which will be this vector that is a straight line from the starting point to the ending point. The distance, we can count the number of blocks that are traveled here starting from the starting point. We go down two blocks, and then a third, fourth, fifth, sixth, seventh, eighth block to the right, and then nine, ten, eleven, twelve blocks after we go up, and then 13 blocks total once we go one to the left. I added each of these sections here, two blocks down six blocks to the right, four blocks up, and then one block to the left. Then multiply it by 120 meters per block. That gives us 1,560 meters total distance covered. Then in Part B, we'll figure out the magnitude of the displacement vector. This arrow on top means we're dealing with a displacement factor. Now this is no longer distance. The absolute value signs are a way of saying the lengths of the vector. That's going to be the square root of the x-component of the displacement vector squared plus its y-component squared. Its x-component is going to be six blocks to the right minus one to the left, or a total of five blocks. If we draw that displacement vector on here like this, this component here is x-component. Here's the displacement vector and here's the x component of that displacement vector, and it's one, two, three, four, five blocks long. Then its y-component is negative two blocks down plus four blocks upwards. It's two down and then one, two, three, four upwards, or you can draw it on this picture. Maybe this part here, this is d, subscript y, the y-component of the displacement vector, and it's two blocks. To find the length of the displacement vector, we are finding the length of this hypotenuse of this right triangle. We have the Pythagorean sum which is 5.3852 blocks times 120 meters per block, which is 646 meters. Then we need to figure out what is this angle theta in here because a vector needs both the magnitude, which we found and the direction. We'll find this angle theta and then we'll say that many degrees to the north compared to East, north of East. That's the inverse tangent then of the opposite divided by the adjacent. The opposite being the y-component, the adjacent being the x-component. The inverse tangent of <i>d y</i> over <i>d x</i>, that's the inverse tangent of two blocks divided by five blocks and that gives 21.8 degrees north of East. The final answer for the displacement then is 646 meters, 21.8 degrees north of East.