Skip to main content
Advanced search
Question
Suppose you hit a steel nail with a 0.500-kg hammer, initially moving at $15.0 \textrm{ m/s}$ and brought to rest in 2.80 mm. (a) What average force is exerted on the nail? (b) How much is the nail compressed if it is 2.50 mm in diameter and 6.00-cm long? (c) What pressure is created on the 1.00-mm- diameter tip of the nail?
Question by OpenStax is licensed under CC BY 4.0.
Final Answer
Solution Video 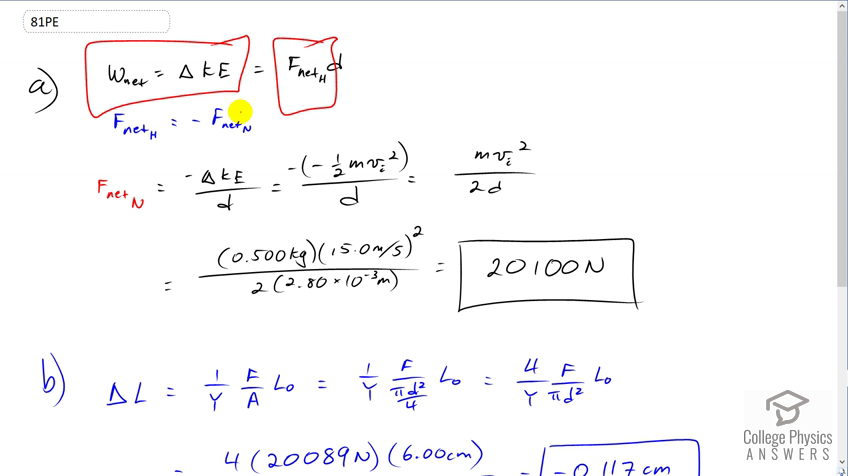 Video Transcript
This is College Physics Answers with Shaun Dychko. We're going to use the work energy theorem to figure what is the net force on the hammer and then we'll say that the force on the nail is the opposite direction to the force on the hammer. So it's the negative of that. The work energy theorem says that the change in kinetic energy of the hammer is equal to the work done on it and so that'll be the net force on the hammer multiplied by the distance over which that force is operating. So we'll divide both sides of this by d because we know how far the nail goes in, which is the distance over which the hammer is decelerated. We get the net force of the hammer is change in kinetic energy over d. Then we'll take the negative of that because the net force on the nail is the negative of the net force on the hammer. So change in kinetic energy is one half m v f squared, minus one half m v i squared. But the final speed is zero so that term I didn't bother writing. So we have just its negative of negative one half m v initial squared, all that's divided by d. This works out to m v i squared over two d because two negatives make a positive. So this is -- well we're taking downward to be the positive direction by the way because we have this displacement as positive. So we have 0.5 kilograms times 15 meters per second squared, this is the mass of the hammer and its initial speed squared, divide that by two times the distance over which the hammer is brought to a stop which is the distance that the nail goes in, 2.8 millimeters which is 2.8 times ten to the negative three meters. This works out to 20,100 newtons. Then part B, the question is how much is the nail compressed? Well we know that the change in length of an object is one over Young's Modulus of that material multiplied by the pressure on the object or the force divided by its cross-sectional area, multiplied by its original length. So that's one over Young's Modulus times F over pi dsquared over four, that's the area of a circle, that's the area of the nail, times l naught, and that's four F l naught over y pi d squared when you simplify this. So that's four times 20,089 newtons which is the force, but you know, this is the rounded answer up here, and here we have the un-rounded number to avoid intermediate rounding error. We multiply by six centimeters and I'm going to leave it as centimeters because this meter squared is going to cancel with this meter squared and we'll be left with an answer in centimeters. So we have -- we're dividing all this by the Young's Modulus for steel, 2010 times ten to the nine newtons per square meter, I looked this up in chapter five, times by pi, times two and a half times ten to the minus three meters, and square that. That works out to negative 0.117 centimeters. This is the original length of the nail and that's how much it gets compressed. This is the diameter of the nail. Then the question is what's the pressure? The tip of the nail has a radius of one millimeter and so we're going to take the force applied on the nail and divide by its cross-sectional area at the tip. So that's going to work out to -- after we substitute this for the area of the nail and this is pi d squared over four and I can multiply top and bottom by four to make the four appear in the numerator. So we have four times 20,089 newtons divided by pi times one times ten to the minus three meters squared, giving us 2.56 times ten to the ten Pascals.