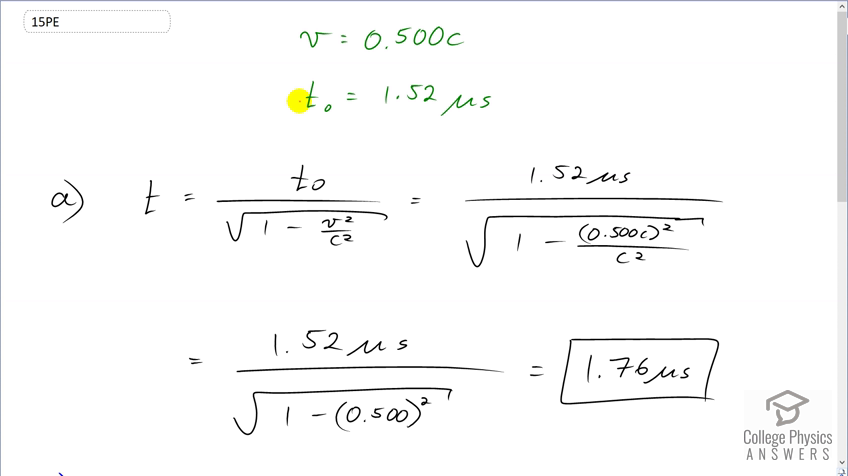 This is College Physics Answers with Shaun Dychko. When at rest, with respect to a muon, it's lifetime is 1.52 microseconds and so that's going to be the proper time, which is measured at rest, with respect to the muon. Now, suppose that it is going at a speed of 0.500<i>c</i>, we are asked to figure out, how long would its lifetime be then? So that's going to be the proper time divided by square root 1 minus its speed squared divided by speed of light squared. So that's 1.52 microseconds divided by square root of 1 minus 0.500<i>c</i>, all squared, divided by <i>c</i> squared which is 1.52 divided by square root 1 minus 0.500 squared which is 1.76 microseconds. And so because the muon is now moving in part (a), the lifetime of it has gotten bigger, or dilated, compared to its proper time. OK. And then part (b) asks, how far will this muon move according to somebody on the Earth? So somebody in a laboratory on Earth is going to be measuring the proper distance because they are at rest with respect to the beginning and end points of this muon's existence; it begins over here and then it's created there and then, you know, has decay over here and a person who's on Earth, is at rest, with respect to these two locations and so they measure proper length. But you don't really need to know that; all you need to know is the distance that it travels is going to be its speed multiplied by the amount of time that it travels; this is a classical formula. And so we have 0.500 multiplied by speed of light—this is its speed— multiplied by its lifetime that we just figured out in part (a) and that's going to be 263 meters. Now, according to the muon itself, if the muon could do a measurement of how far it travels, it would be measuring relativistic length, which is gonna be shorter and that's going to be the proper length times this square root 1 minus <i>v</i> squared over <i>c</i> squared. An alternate way to calculate this is you could say, similarly to how we use this formula for the proper length, we could get the relativistic length by multiplying its speed by proper time because the muon, in the muon's frame of reference, its lifetime that's measured will be proper time because the muon is at rest, with respect to itself, and so the lifetime that it measures of itself is going to be proper time and you would get the same answer as we are going to calculate here. So we have the proper length—263.095 meters calculated in part (b)— times square root of 1 minus 0.500<i>c</i> squared over <i>c</i> squared gives us 228 meters. And like I said, if you took 1.52 times 10 to the minus 6 seconds and multiplied it by 0.500<i>c</i>, you would get the same answer.

Solutions for problems in chapter 28