Skip to main content
Advanced search
Question
a) What is the mechanical advantage of a wheelbarrow, such as the one in Figure 9.25, if the center of gravity of the wheelbarrow and its load has a perpendicular lever arm of 5.50 cm, while the hands have a perpendicular lever arm of 1.02 m? (b) What upward force should you exert to support the wheelbarrow and its load if their combined mass is 55.0 kg? (c) What force does the wheel exert on the ground?
Question Image
Question by OpenStax is licensed under CC BY 4.0.
Final Answer 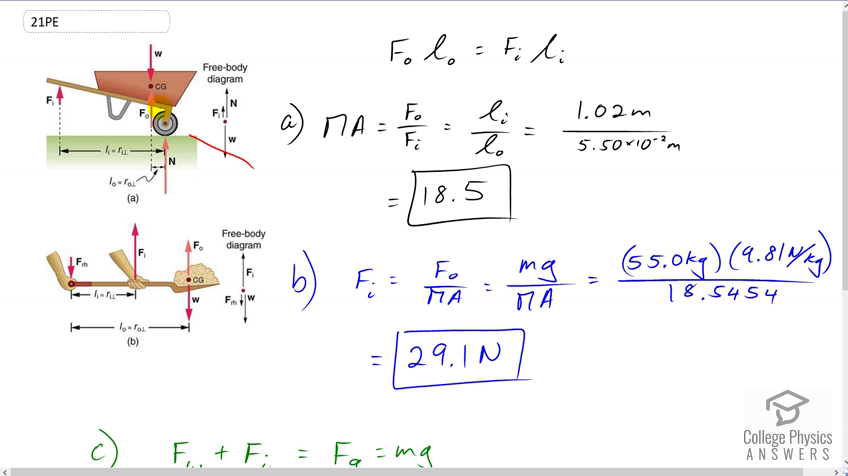 Video Transcript
This is College Physics Answers with Shaun Dychko. Mechanical advantage is the ratio of the output force divided by the input force. The output force is not really force on the system in the same way that the input force on the weight are. It’s this effective force that, you know, a force applied here translates to at this location. We can talk about these torques here. The torque due to this effective output force multiplied by its level arm, which is the output level arm, that equals the input force times its level arm, and when we rearrange this and divide both sides by Fi, we can also divide both sides by l naught and we get F naught over Fi equals li over l naught. We’re told the input level arm is 1.02 meters and the output level arm is 5.5 centimeters which I’ve written as 5.5 times ten to the minus two meters. It actually doesn’t matter what the units are here, just so long as they are the same, that’s what’s important. So you can divide centimeters by centimeters or meters by meters. So we get 18.5 is the mechanical advantage. Now the input force required in order to lift the load and wheelbarrow which has a combined mass of 55 kilograms, is going to be F naught divided by the mechanical advantage. So we have 55 kilograms times gravitational field strength divided by the mechanical advantage, giving us 29.1 newtons is the input force. And this is the purpose of the wheelbarrow is to make this force that has to be applied by the person, 29.1 newtons, much less than the weight of material being transported. Then finally, the force on the wheel is the next question, it’s labelled N in this diagram, I’ve labelled it F subscript w for wheel, force of the wheel. The total up forces have to equal the total down forces, so the force of the wheel is up and the input force is up, and that equals the down force which is just gravity, mg. We’ll subtract Fi from both sides, and we solve for Fw. So the force of the wheel applies is the weight of the load and wheelbarrow minus the input force, 55 kilograms times 9.8 minus 29.093 newtons, giving us 510 newtons is the force applied on the wheel.