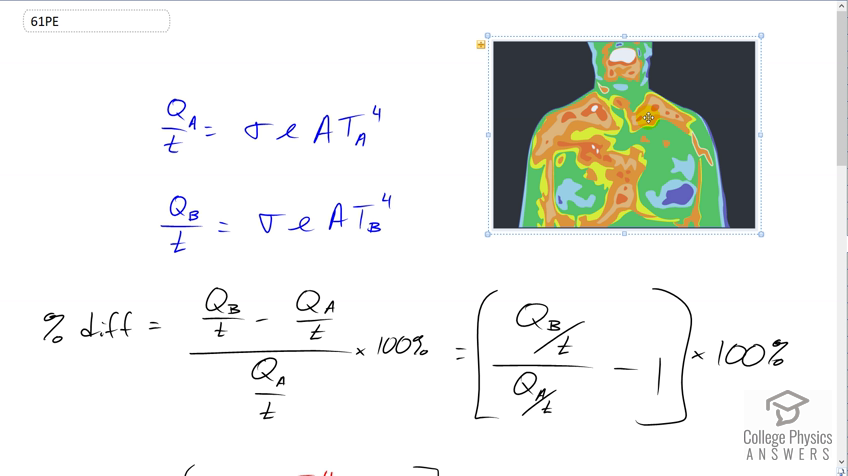 Video Transcript
This is College Physics Answers with Shaun Dychko. Thermography is a way of turning a spectrum of different infrared radiation intensities into a picture that somebody can interpret. So these different colors on this person’s body represent different intensities of thermal radiation. Presumably, blue would be a low intensity, and red would be in high intensity but that’s, you know, depending on the conventions of the software that converts intensities into colors. Because these are not colors that are actually seen: these are computer interpretations of intensities. So, it’s a way of graphing intensities on a surface. So, we’re going to find the percent difference in intensities due to small changes in temperature. So the rate at which thermal energy is radiated from body A, will be Stefan-Boltzmann’s constant, times emissivity, times area, times temperature A to the power of four. And for B (position B on the body) it’ll be the same stuff except for temperature B to the power of four. And so the percent difference will be the difference in the rate of heat transfers, divided by the original (or one of them), and times by a hundred percent. And if you divide the denominator into the numerator, we end up with a minus one here, and then here we have the ratio of the radiation heat transfers. And so, we substitute for each of these using what we’ve written here. And we see that the sigma, and the epsilon, and the areas all cancel, and we’re left with -- the percent difference then is the ratio of the temperatures to the power of four, minus one, times a hundred percent. So, the percent difference between positions at 34 degrees Celsius and 33 degrees Celsius is this: 1.31 percent. And we have to convert the temperatures into absolute temperatures in Kelvin, by adding 273.15 to each of them, and then we raise that ratio to the power of four, minus one, times a hundred percent, to get our answer. And so, the position on the body at 34 degrees Celsius will be, will have a rate of heat transfer, 1.31 percent greater than the position at 33 degrees Celsius. And then comparing 34 degrees Celsius to 20 degrees Celsius will result in a percent difference of 20.5 percent.