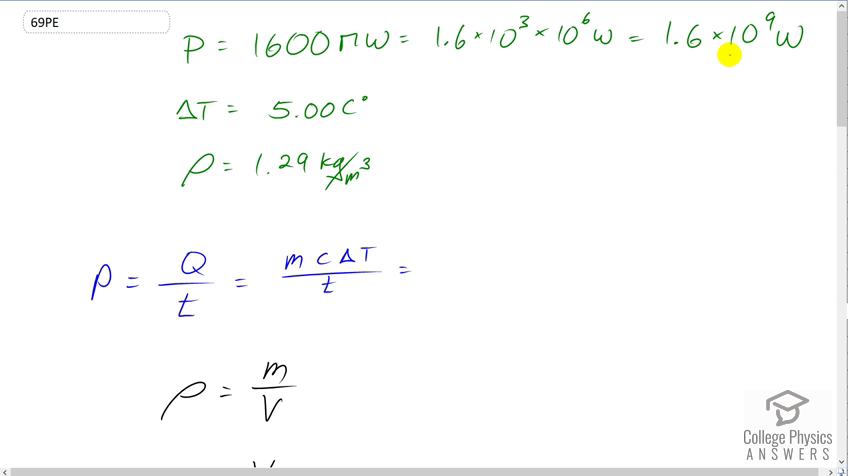 Video Transcript
This is College Physics Answers with Shaun Dychko. So a power utility has to dissipate 1600 megawatts of energy in order to keep operating as to 'cool down' the system, maybe this is a nuclear power plant that has these huge cooling towers. So, the air that flows through this tower is going to be raised by 5 Celsius degrees, and we need to figure out what is the volume rate of flow of air through this tower. So that's in cubic meters per second. So the density of air will be important here: 1.29 kilograms per cubic meter. So the rate of power dissipation is the amount of energy per time, and the amount of energy dissipated is absorbed by the air. And so that's going to be the mass of air that flows through, times the specific heat of air, times its change in temperature, divided by time. Now, we don't know what the mass is, but we want to find out what what this power is in terms of volume. And so we substitute V, times the density rho, in place of m. So density is mass divided by volume, and we solve for m by multiplying both sides by V, and we get mass is volume times density. So we substitute that in for m, which I've written in red here. So the power dissipated is: the volume, times density, times specific heat, times change in temperature,over time. Now we can rewrite this as volume over time here, just... I mean that doesn't really change anything we just changed the way it looks because this is the thing we want to solve for: this is the volume rate of flow. This has cubic meters on the top, and then seconds at the bottom. And so we solve for this by dividing both sides by density, times specific heat, times change in temperature. And we have the volume rate of flow is the power dissipated, divided by density, times specific heat, times change in temperature. So it's 1.6 times 10 to the 9 watts, divided by 1.29 kilograms per cubic meter density of air, times 721 Joules per kilogram per Celsius degree specific heat of air, times 5 Celsius degrees, which is 3.4 times 10 to the 5 cubic meters per second of air flow through this cooling tower. Now, to decide, whether this is unrealistic or not, well we can convert it to liters per second, coz that's in a... liters is something we have a better concept of than cubic meters. So multiply this by a thousand liters per cubic meter. So it's 3.4 times 10 to the 8 liters per second. And that's unrealistically large because we can imagine how big the tower would need to be. So the tower has some, suppose it's a circular or cylindrical tower, with a circular cross-section, and its volume rate of flow through it will be: volume is pi, times r squared (that's the area of an end), multiplied by the height, and then divided by time, and this height divided by time is the speed of the air. So I substituted v, in place of h over t. And now, suppose v is 50 kilometers an hour, I mean that's a very high speed, coz fans are gonna be need to be blowing the air through the tower at the speed which converts to 13.89 meters per second. If you solve this for r, it's gonna be the square root of the volume rate of flow, divided by pi times the speed. So that's 3.4 times 10 to the 5 cubic meters per second that we found here, divided by pi, times 13.89 meters per second, which is 88.3 meters. And so, the tower diameter would be twice that, which is 177 meters, with fans blowing air at 50 kilometers per hour. And, well, this is a huge tower, and fans blowing this fast would probably wear out really easily and be expensive to maintain. Plus, they would consume a lot of electricity, you’d probably need a tiny power plant just to power the fans. So, yeah, this is not realistic.