Skip to main content
Advanced search
Question
A meteorite 1.20 cm in diameter is so hot immediately after penetrating the atmosphere that it radiates 20.0 kW of power. (a) What is its temperature, if the surroundings are at $20.0^\circ\textrm{C}$ and it has an emissivity of 0.800? (b) What is unreasonable about this result? (c) Which premise or assumption is responsible?
Question by OpenStax is licensed under CC BY 4.0.
Final Answer
Solution Video 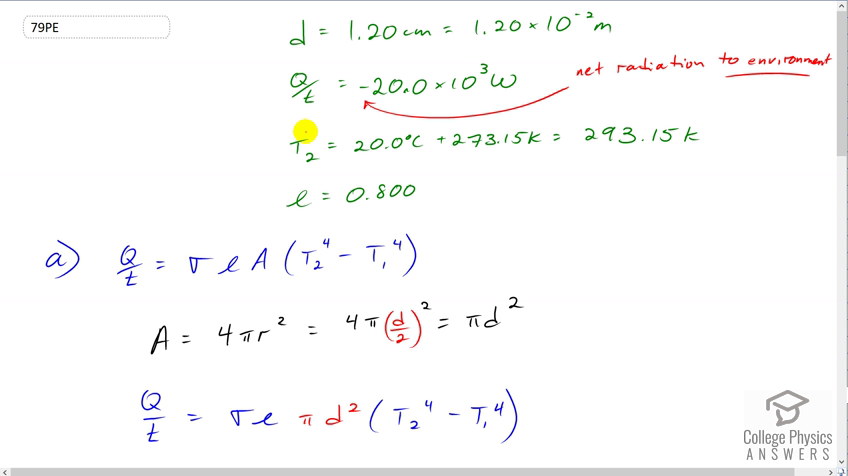 Video Transcript
This is College Physics Answers with Shaun Dychko. A meteorite with diameter 1.2 centimeters, which is 1.2 times 10 to the minus 2 meters, is radiating energy at a rate of 20 kilowatts. And so, I've written Q over T is negative 20 times 10 to the 3 watts. It's negative because this radiation is going to the environment. This formula that we have for Q over T is the formula for the rate at which an object absorbs energy from its environment. So, if it's in fact having a net emission to the environment, then this formula will give us a negative answer, because that's why we have negative 20 here. So, the temperature of the environment is 20 degrees Celsius, which in absolute terms is 293.15 Kelvin. And, the emissivity, we are told is 0.80. So, we have to figure out the temperature of the meteorite. So, we have this formula for the rate at which radiation is emitted from an object. It's Stefan Boltzmann's constant times emissivity times its surface area times the temperature of the environment to the power of 4 minus temperature of the object to the power of 4. So, the surface area of a sphere, which we'll assume this meteorite is, is 4 pi times its radius squared. So, that's 4 pi times diameter over 2, because radius is half the diameter, squared, and this makes pi d squared because this denominator 2 gets squared and then canceled through this 4 here. So, we substitute pi d squared in place of area. And then, we distribute this into the brackets and we have Q over T is Sigma E pi d squared T2 to the power of 4 minus Sigma E pi d squared T1 to the power of 4. And then, we bring this term to the left side by adding it to both sides. And, we bring this term to the right side by subtracting it from both sides. And so, we have a minus Q over T on the right and we have a positive Sigma E pi d squared T1 to the power of 4 on the left. Then, we divide both sides by the factors multiplying by T1. And then, we take both sides to the power of 1 quarter to solve for T1 because T1 to the power of 4 to the power of 1 quarter will become T1. And, these factors canceled in this term, so that's why you just see T2 to the power of 4 by itself. And, these factors have to show up underneath the Q over T term here. So, then we plug in numbers and we have 293.15 Kelvin is the temperature of the environment to the power of 4 minus negative 20 times 10 to the 3 watts over Stefan Boltzmann's constant times emissivity times pi times the radius squared, or this is the diameter, I should say, squared. That shouldn't be there. So it's just Sigma E pi d squared. Okay. All of this is to the power of 1 quarter, which gives 5.59 times 10 to the 3 Kelvin. So, that is very very hot and the melting point of granite, just to take an example of a rock that this meteorite might be made out of, is 1260 degrees Celsius, which in Kelvin is 1533. To write it in scientific notation, so we have times 10 to the 3. And, we can compare it with this times 10 to the 3, we can see that the meteorite is supposedly about 5 times as hot as the melting point of granite. And so, since that's so much hotter than the melting point of granite, we can assume that this meteorite will actually be a liquid. And, it's not going to be a meteorite at all because a meteorite is a term for a rock that actually hits the ground, otherwise it's just a meteor. And, this is what happens to most meteors that hit the Earth is that they melt and then burn up in the atmosphere. So, that's what's going to happen to this one, too. So, it's not reasonable to think that it radiates 20 kilowatts if there's an assumption that it will hit the ground. And there we go.