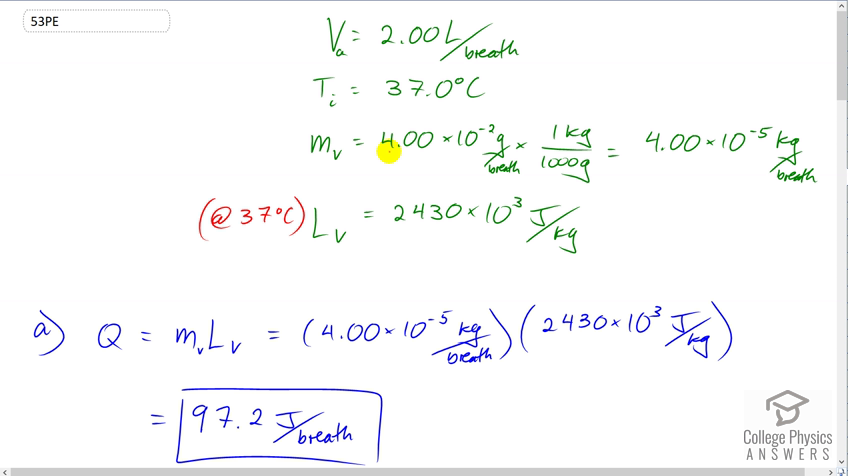 Video Transcript
This is College Physics Answers with Shaun Dychko. A person is breathing two liters of air per breath and the air is at 37 degrees Celsius. And, we're told that four times ten to the minus two grams of water within the lungs is evaporated on each breath. And, we'll convert that into kilograms by multiplying by one kilogram for every 1000 grams. And, we have four times ten to the negative five kilograms per breath of water evaporated. Now, the latent heat of vaporization for water at 37 degrees Celsius is 2430 times ten to the three Joules per kilogram and this is not the number you will find in the data table for latent heat of vaporization because the data table is made for temperatures at the boiling point whereas this is at the temperature of 37 degrees Celsius. And, even though the water is not boiling, it nevertheless does change phase a little bit from liquid to gas and we call that evaporation. And, this is how much energy is taken away for every kilogram at that temperature. So, the amount of heat transferred as a result of this evaporation is the mass that is evaporated multiplied by that latent heat of vaporization and this makes 97.2 Joules per breath. And then, part B is asking us for what's the rate of heat transfer in watts if the person is breathing at 18 breaths per minute. So, power is the energy per time and so we need to figure out the time for one breath because we have the energy per breath. And so, we need to divide that by time per breath. And so, the time is going to be one minute for every 18 breaths. If there's 18 breaths per minute, that means there's one minute for every 18 breaths. We can take the reciprocal of that. And so, the minutes cancel leaving us with seconds per breath. So, 3.333 seconds for every breath. So, the power transfer then is 97.2 Joules per breath divided by 3.333 seconds per breath, which leaves us with Joules per second, which is watts. 29.2 watts. This per breath unit, so to speak, cancels. Okay. And then part C says if the inhaled air has a temperature of 20 degrees Celsius, what is the rate of heat transfer for warming the air? And so, again, we have power is energy per time, but the energy now is going to be the mass of air inhaled multiplied by its specific heat and then multiplied by the change in temperature. Now, we don't know the mass inhaled, but we do know its volume and we can also look up its density. So, the density of air is its mass divided by its volume, and we'll solve for mass by multiplying both sides by Va. And now we have the mass is the density of air times the volume of air. And so, we'll substitute that in place of M there and I've written that in red here. And so, all this gets substituted in for Q in the power formula. So, power is density times volume times specific heat times change in temperature divided by time. And so, this is going to be Joules per breath, and this is going to be seconds per breath. So, the per breath units cancel again, leaving us with Joules per second, which is Watts. So we have 1.29 kilograms per cubic meter density of air times two liters per breath, which we have to convert into cubic meters by multiplying by one cubic meter for every 1000 liters. And then, times by 721 Joules per kilogram per Celsius degree and that's the specific heat of air. And then, times by the change in temperature, 37 degrees Celsius. Final temperature minus the 20 degree Celsius initial temperature divided by 3.3333 seconds per breath. And this is 9.49 watts. So, the total rate of heat transfer from the lungs is this due to evaporation plus this due to increasing the air temperature from 28 to 37 degrees Celsius and that is a total of 38.7 watts. And then, if you look at section 7.7, it tells us metabolic rates for different activities such as sleeping, which is 83 watts and heat loss due to breathing will be 38.7 divided by 83 times 100 percent, which is 47%. So, heat loss is significant due to breathing because it accounts for almost half of all the heat loss while sleeping.