Skip to main content
Advanced search
Question
A 0.250-kg aluminum bowl holding 0.800 kg of soup at $25.0^\circ\textrm{C}$ is placed in a freezer. What is the final temperature if 377 kJ of energy is transferred from the bowl and soup, assuming the soup’s thermal properties are the same as that of water? Explicitly show how you follow the steps in Problem-Solving Strategies for the Effects of Heat Transfer.
Question by OpenStax is licensed under CC BY 4.0.
Final Answer 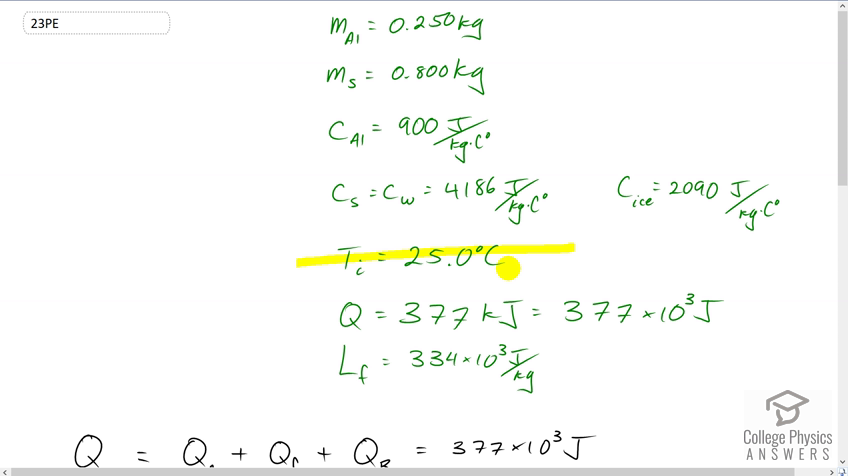 Video Transcript
This is College Physics Answers with Shaun Dychko An aluminum bowl with some soup is placed in a freezer, and the soup and bowl have an initial temperature of 25 degrees Celsius. And we’re told that 377 kiloJoules of energy are taken out of the soup, which is 377 times 10 to the 3 Joules. And the question is “what is the final temperature of the soup?” So, we have three heat transfer terms to consider: one is the heat transfer to change the temperature of the soup and bowl from 25 degrees Celsius to zero; and then once it’s at zero, we have the heat transfer to freeze the water from a liquid into a solid, and that’s the heat of fusion; and then after that, we have a further heat transfer to reduce the temperature from zero degrees Celsius to whatever the final temperature is that we’re going to calculate. So that’s the total energy taken out, which we’re told is this much. So some information that we, I need to research here is the latent heat of fusion for water which is 334 times 10 to the 3 Joules per kilogram. The specific heat of aluminum is 900 Joules per kilogram per Celsius degree. And the specific heat of the soup, we’re told to assume is the same as that of water, which is 4186 Joules per kilogram per Celsius degree. And the specific heat of ice, which will be needed for this final heat transfer term here, where we’re changing the temperature of the frozen soup and bowl from zero to whatever final temperature is. The specific heat of ice will be this much. Okay, and we’re told that there’s .25 kilograms of aluminum in the bowl, and .8 kilograms of soup. So, the first step is to substitute for the heat transfer to change temperature from 25 degrees Celsius to zero. Now, a small oddity is that I’ve reversed these temperature terms. Normally, you have final minus initial, and the final temperature is zero, and the initial temperature is 25. But I’ve reversed them around because we want to have the heat transferred out of the soup. This Q formula, you know, Q equals mc delta T, is the amount of heat transferred into something. And when heat is transferred out, it becomes negative. And when it becomes negative, we can have, you know, it’s negative mc T final minus T initial, if you write it the proper way. But this can be instead written as positive mc times T initial minus T final. And so, you can make this negative Q, you can write it instead like this: you have mc times the temperatures with the initial written first, and the final written second. And so that’s why this is written that way. So, we’re making this whole term positive in other words. And then we have the heat of fusion: the mass of the soup times the latent heat of fusion for water. And then add to that the mass of the aluminum times the specific heat of aluminum plus the mass of the soup times the specific heat of ice, as we go from zero degrees to some final temperature that we will calculate. So, we distribute this bracket into this one here, which conveniently turns to only two terms because... or one if depending on how you look at it because multiplied by zero makes zero. And so we have this term for the change in temperature from 25 degrees Celsius to zero written here, and that’s a minus because I subtracted it from both sides so I’m taking this to the left hand side, and then this term also is going to the left hand side or we’re subtracting it from both sides, you might say. And then we’re left with this, by itself, on one side and this bracket here multiplied by zero makes zero. And this bracket is getting multiplied by negative T final. So it’s negative T final. And then I switch the sides around as well after all that in order to have the unknown on the left. Okay, so we have negative T final times all this written here. And then equals the total energy transferred from the soup minus each of these two terms here. Okay. And then, we’ll solve for T final. We’ll divide both sides by this bracket here. So that’s divided by negative m al C al, plus m soup C ice, both sides. Now, this negative makes each of the terms in the numerator change the sign. And so that’s why we have a positive ms Lf here, and a positive bracket times T i, and then the Q t is negative. Then on the bottom we’ve written positives. Okay, then we plug in numbers and get our answer. So the final temperature is: the quarter kilograms of aluminum multiplied by specific heat of aluminum; plus the .8 kilograms of soup multiplied by specific heat of water, while it’s in the water liquid state; times 25 Celsius degrees --- change in temperature from 25 to zero; plus the heat of fusion, which is the mass of the soup multiplied by the latent heat of fusion for water; and then subtract from that the total energy taken from the soup; and then divide by the mass of aluminum times specific heat of aluminum plus the mass of the water times the specific heat of ice. And end up with a final temperature of negative 10.8 degrees Celsius. And there we go.