Skip to main content
Advanced search
Question
A large body of lava from a volcano has stopped flowing and is slowly cooling. The interior of the lava is at $1200^\circ\textrm{C}$, its surface is at $450^\circ\textrm{C}$ , and the surroundings are at $27.0^\circ\textrm{C}$.
Question by OpenStax is licensed under CC BY 4.0.
Final Answer
Solution Video 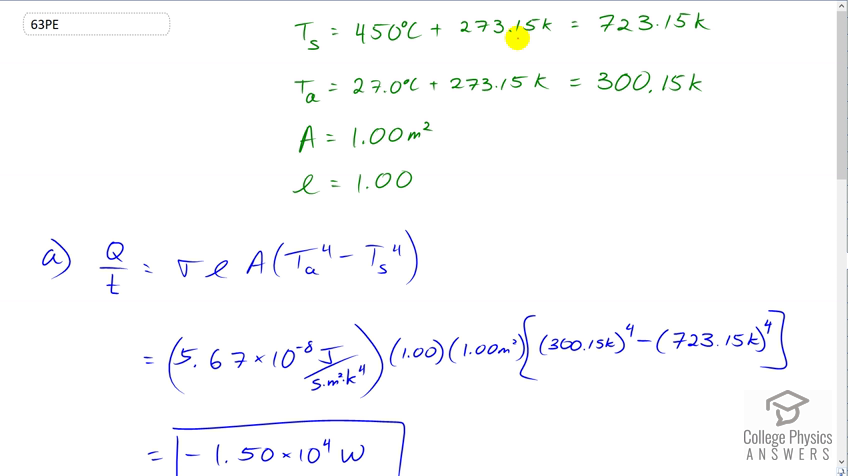 Video Transcript
This is College Physics Answers with Shaun Dychko. Some lava has a surface temperature of 450 degrees Celsius, which we converted to Kelvin by adding 273.15, and the air surrounding the lava has a temperature of 27 degrees Celsius, which converts into 300.15 Kelvin. And, the area we’re meant to consider is one square meter, and this lava has an emissivity of one. And the question is: “What’s the rate of heat transfer due to radiation from the surface of the lava to the surrounding air?” And so we’ll find that by multiplying Stefan-Boltzmann’s constant, by the emissivity, by the one square meter area we are meant to consider, and we multiply by the temperature of the surroundings, which is air, into the power of four, minus the temperature of the surface of the lava to the power of four. So that’s 5.67 times 10 to the minus 8 Joules per second per meter squared per Kelvin to the fourth, times one, times one square meter, times 300.15 Kelvin to the power of 4, minus 723.15 Kelvin to the power of 4, which gives us a heat transfer rate of negative 1.50 times 10 to the 4 watts. Now this negative means that this surface is losing heat energy. And so, because this formula is meant to tell us by what rate is energy being gained by an object from its surroundings, and in this case, it’s losing energy to its surroundings, and so the rate at which heat is gained is negative. So, this lava has some thickness and we’re meant to find out what this thickness is, and that’s gonna be d, this formula here. And there’s some rate of heat conduction from the 1200 degrees Celsius bottom of this layer of lava, and the 450 degree Celsius surface, and this rate of heat transfer due to conduction is meant to equal the rate at which the surface is losing energy due to radiation. And so we figured out this energy due to radiation. And so, we set that equal to this. So, the rate of energy being transferred due to conduction is the thermal conductivity of the material, and we’re told that it’s the same as that of granite, I think? Or that of brick. Yep. And then we multiply by the area, and then multiply by the temperature difference between the bottom and the top, and divide by the rate to solve for d. Because what we did here is we solved for d by going d divided by Q over t. And so, the d cancels on the left, leaving us with Q over t on the bottom there, and then on the left side, times by d over Q over t. And you might prefer -- instead of dividing by a fraction -- you might, instead, want to multiply by its reciprocal. So it’s the same idea. So we’re gonna multiply by the reciprocal of this denominator, and then it becomes more clear that these Q’s and t’s cancel, leaving us with d on the left. So d equals (the thickness equals) the thermal conductivity, times the area, times the temperature difference, divided by the rate of heat transfer. So, temperature two at the bottom, converted into Kelvin, is 1473.15 Kelvin. And temperature one, we already figured out before, is temperature of the surface, 723.15 Kelvin. So we plug in all our numbers: .84 Joules per second per meter per Celsius degree, thermal conductivity of brick, times one square meter, times the temperature difference, divided by the rate of heat transfer, which we calculated in part A, and we’re using the unrounded value with lots of digits in order to avoid intermediate rounding error, and we end up with this thickness which converts into 4.2 centimeters.