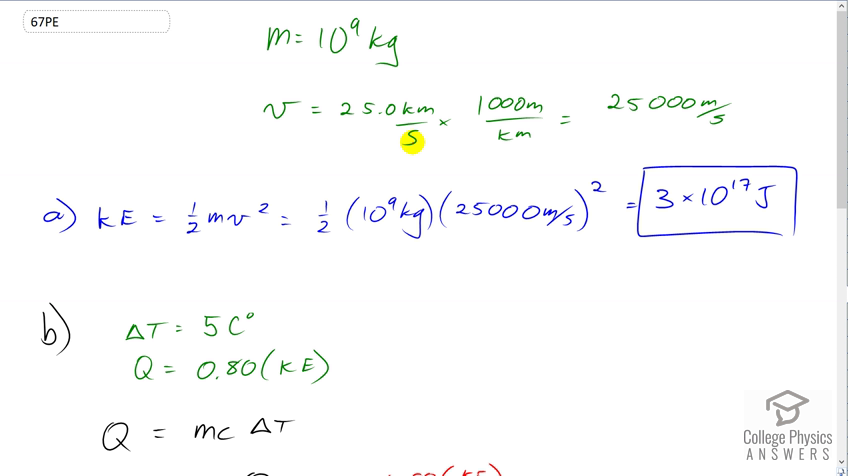 Video Transcript
This is College Physics Answers with Shaun Dychko. A meteorite is going to strike the earth and it has a mass of 10 to the 9 kilograms, and a speed of 25 kilometers per second, which we convert into meters per second by multiplying by 1000 meters per kilometer, that’s 25000 meters per second. So the kinetic energy that it has is one half, times its mass, times its speed squared. So it’s one half, times 10 to the 9 kilograms, times 25000 meters per second squared, which is 3 times 10 to the 17 Joules. And the next question is: “If it were to land on the ocean, how much water could it raise by five Celsius degrees? (Assuming that 80 percent of its kinetic energy is converted into thermal energy).” So, the thermal energy, transferred to the water is going to be: the mass of the water heated, times the specific heat of water, times the change in temperature. And we’re gonna solve for m by dividing both sides by C, Delta T. So mass is: thermal energy transferred, divided by specific heat of water, times the change in temperature. So that’s .8 times kinetic energy, divided by C, Delta T. So that’s .8 times 3.125 times 10 to the 17 Joules that we calculated in part A (using lots of digits because this is an intermediate calculation), divided by 4186 Joules per kilogram per Celsius degree, times 5 Celsius degrees. And this is 1 times 10 to the 13 kilograms of ocean water could be heated by 5 Celsius degrees. Now, in reality, it’s more likely that the meteorites would transfer their energy into kinetic energy of the water and create tidal waves, rather than turning in to thermal energy.