Skip to main content
Advanced search
Question
The Kilauea volcano in Hawaii is the world’s most active, disgorging about $5 \times 10^5 \textrm{ m}^3$ of $1200 ^\circ\textrm{C}$ lava per day. What is the rate of heat transfer out of Earth by convection if this lava has a density of $2700 \textrm{ kg/m}^3$ and eventually cools to $30^\circ\textrm{C}$? Assume that the specific heat of lava is the same as that of granite.
Question Image
Question by OpenStax is licensed under CC BY 4.0.
Final Answer 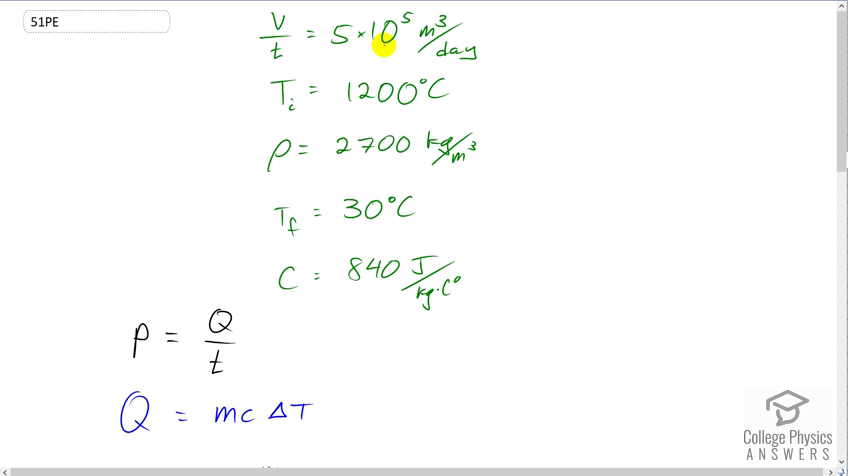 Video Transcript
This is College Physics Answers with Shaun Dychko. Mount Kīlauea is disgorging five times ten to the five cubic meters of lava every day. And the lava has a temperature initially of 1200 degrees Celsius and it has a density of 2700 kilograms per cubic meter and the final temperature of 30 degrees Celsius. And, we're told that the lava has properties of granite and so its specific heat is 840 Joules per kilogram per Celsius degree. So, when it cools from 1200 degrees Celsius to 30, given this specific heat and a certain amount of mass which we'll figure out based on density in this volume rate of transfer from inside the earth to the outside, we'll figure out what is the rate of heat transfer from the inside of the earth to the outside. Okay. So, the rate of heat transfer of all this lava. Alright. So, power is what we want to find. And, it's the amount of heat divided by time. And, the amount of heat is going to be the mass of the lava times the specific heat times its change in temperature from 1200 to 30 degrees Celsius. Now, the mass we don't precisely know directly, and so we need to figure it out based on knowing density. And, density is mass divided by volume. We can solve for M by multiplying both sides by V, so mass is volume multiplied by density. So, we substitute for that in place of M. We write that here in red. And then, substitute all of this in place of Q in our power formula. So, power is going to be volume times density times specific heat times change in temperature divided by time. And, I'm rewriting this slightly by writing this as volume over time times rho C Delta T because volume over time is something that we're given directly. It is this quantity, five times ten to the five cubic meters per day. So, we have five times ten to the five cubic meters per day, but we have to write day in units of seconds in order to have M K S units as we need to have in almost all of our formulas. So, one day times 24 hours per day times 3600 seconds per hour gives us a day in seconds. And so, all this gets multiplied by 2700 kilograms per cubic meter density times 840 Joules per kilogram per Celsius degrees specific heat of granite, times 30 degrees Celsius minus 1200 degrees Celsius. And so, we have a power output of -1.536 times ten to the ten watts. And so, this is power being lost, and so we'll write it as a positive number here by saying it's power lost by the lava, two times ten to the ten watts. And, we can have only one significant figure here because we have this volume rate of transfer is only one significant figure.