Skip to main content
Advanced search
Question
Suppose the ski patrol lowers a rescue sled and victim, having a total mass of 90.0 kg, down a $60^\circ$ slope at constant speed, as shown in Figure 7.36. The coefficient of friction between the sled and the snow is 0.100. (a) How much work is done by friction as the sled moves 30.0 m along the hill? (b) How much work is done by the rope on the sled in this distance? (c) What is the work done by the gravitational force on the sled? (d) What is the total work done?
Question Image
Question by OpenStax is licensed under CC BY 4.0.
Final Answer
Solution Video 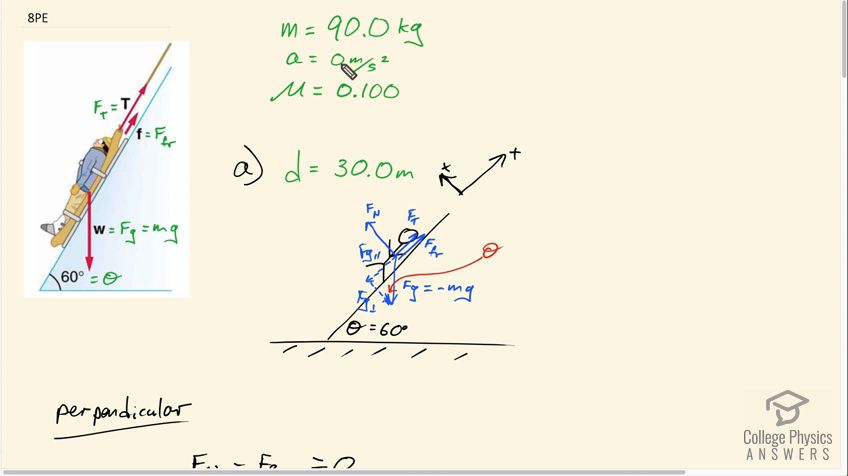 I watch a lot of your videos and find them very helpful but your explanation for part A had me so completely lost. I also think the drawing was too small for you to add in the extra triangles. It was hard to see what you were doing or circling.

OK, thanks for this good constructive feedback. I've flagged the video for a re-do. It won't happen soon since I'm still finishing the even numbered problems for other chapters, but I'll get around to it eventually.

In reply to OK, thanks for this good… by ShaunDychko

How would one find the tension of the rope in this scenario?

Hello valerie_508,
Thanks for the question. The formula for the tension force is at 8:35 in the video since we needed it to find the work done by the rope.
All the best,
Shaun

In reply to How would one find the… by valerie_508