Skip to main content
Change the chapter
Question
In a downhill ski race, surprisingly, little advantage is gained by getting a running start. (This is because the initial kinetic energy is small compared with the gain in gravitational potential energy on even small hills.) To demonstrate this, find the final speed and the time taken for a skier who skies 70.0 m along a $30^\circ$ slope neglecting friction: (a) Starting from rest. (b) Starting with an initial speed of 2.50 m/s. (c) Does the answer surprise you? Discuss why it is still advantageous to get a running start in very competitive events.
Question by OpenStax is licensed under CC BY 4.0.
Final Answer

c) The difference in times is small ($0.49 \textrm{ s}$), which is expected since $v_i << v_f$. Half a second could make a big difference in placements in highly competitive events, such as the olympics, however. 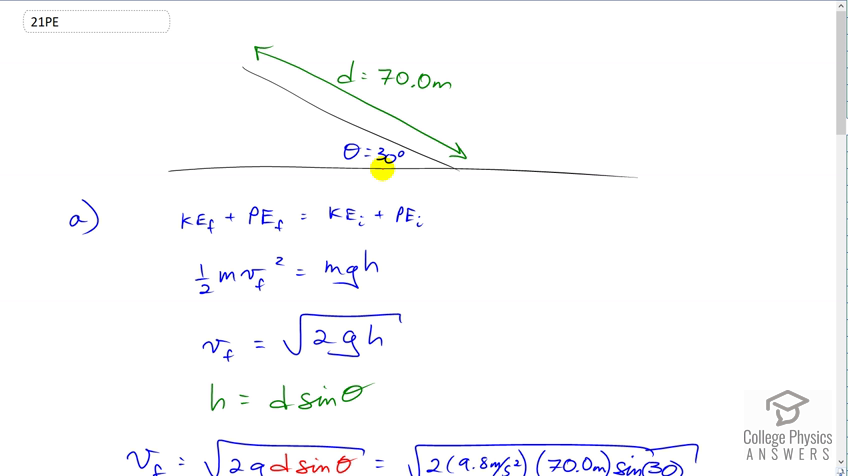 This is College Physics Answers with Shaun Dychko. A skier descends a 70 meter slope which is inclined at an angle of thirty degrees and we have to find out what their final speed will be at the bottom, assuming there is no friction and assuming they have an initial speed of zero for part A. Then we do the calculation again assuming an initial speed of 2.5 meters per second in part B. Then we compare the total time it takes to get to the bottom of the slope in each case. So we know that the total energy at the end, kinetic plus potential, equals the total energy at the beginning. So we have no potential energy at the end because we'll assume this is our reference level, y equals zero, so the final potential energy is zero. So we have only kinetic energy when the skier is at the bottom. So that's one half mass times final speed squared, and in the initial case we have no kinetic energy because we assume an initial speed of zero for part A and the initial potential energy will be <i>mg</i> times <i>h</i>, the vertical height above the ground. So we can divide both sides by <i>m</i> and then multiply both sides by two and also take the square root of both sides. We end up with the final speed is the square root of two <i>g</i> times the height. Now the height is the opposite leg of this yellow triangle. So we go sine <i>theta</i> multiplied by the hypotenuse which is <i>d</i> in order to find the height. We'll substitute that in for <i>h</i>. We have <i>vf</i> equals square root of two<i>gd</i> sine <i>theta</i>. So that's the square root of two time 9.8 meters per second squared times 70 meters times sine 30 which is 26.2 meters per second. So that's the final speed at the bottom of the slope. Then the next part of this question is what time does it take to get to the bottom of the slope. Well, the total displacement along the slope is going to equal the average velocity multiplied by the time. So we can solve this for <i>t</i> because we know all these other things in the formula. So we'll say, let's multiply both sides by two over <i>v i</i> plus <i>vf</i> and then switch the sides around. We get that <i>t</i> is two <i>d</i> over <i>v i</i> plus <i>vf</i>. So that's two times 70 meters divided by zero initial speed, plus 26.2 meters per second, final speed, giving us 5.35 seconds to descend the slope. Now, in part B the only difference is that there is an initial kinetic energy. So we have this one half <i>m vi</i>squared term which is the only difference compared to that second line in part A. We will multiply both sides by two over <i>m</i> and the two and the m cancel in the first term leaving us with <i>vi</i> squared there. Then on the second term the m's cancel, but we're left with the two behind. So that's two <i>gh</i> there, and then we take the square root of both sides to solve for <i>vf</i>. So <i>vf</i> equals the square root of <i>vi</i> squared plus two<i>g d</i> sine <i>theta</i> where we substituted <i>d</i> sine <i> theta</i> in place of the height <i>h</i>. Then we substitute in numbers. So it's the square root of 2.5 meters per second initial speed squared, plus two times 9.8 times 70 times sine 30, giving us 26.3 meters per second is the final speed which is nearly the same as the final speed we had in part A, 26.2. But there is a bit of a -- so this difference in speeds is one tenth whereas the difference in times is actually going to be more significant. It's still a small difference but it's more significant. So we have the time is going to be two <i>d</i> over <i>vi</i> plus <i>vf</i> for the same reason that it was over here. We solved this formula here for <i>t</i> and that's two times 70 divided by 2.5 meters per second initial speed, plus 26.3106 meters per second final speed. That's 4.86 seconds is the total time to get down the slope. So the difference in times is small, 5.35 minus 4.86 is only about half a second. We expect that since the initial speed is so much less than the final speed. But half a second could make a big difference in placement be it first, second, third, fourth in a highly competitive event.

Where are pair number. What I’m paying while you don’t have most of them

Hello linagermilus, posting content is still in progress. To accelerate coverage of as many chapters as possible, I'm covering only the odd numbers until all of the chapters are covered. Only 9 chapters to go! If you have questions about your subscription, please don't hesitate to reach out at https://collegephysicsanswers.com/contact.

In reply to Where are pair number. What… by linagermilus

I couldn't ignore the amount of ignorance in your comment.. you're paying for information that is more than likely going to be the only reason you pass your course.

In reply to Where are pair number. What… by linagermilus

How are you able to multiple sine into a square root? No calculator I have, even ones I looked up, are able to do this. There should only be an error.

Hi kelseylane11, thanks for the question. The second calculator screenshot might be helpful. It shows taking the sine within the square root. There's nothing special about doing this: Sine produces a number, and then the square root is taken of that number. In this particular question, the number produces by Sine is multiplied by a few factors before the square root of that product is taken, but the idea is the same: Sine makes a number, then one can take the square root of that number. In this question the Sine of 30 is 0.5. One could write "0.5" instead of "Sin(30)", and the effect would be the same.
Hope this helps,
Shaun

In reply to How are you able to multiple… by kelseylane11

I figured it out. Thank you for the help!

In reply to I figured it out. Thank you… by kelseylane11

I realized that the error I was getting when I tried to factor sin(30) in the square root was due to my TI-84 calculator setting. Once I fixed the mode to normal and degree, I was able to calculate the correct answer.

I am thankful for your help and I am happy to pay to have a tutor on demand. Keep up the great work you are doing.
~m

Awesome! I'm really glad the videos are helping. Thanks for sharing that feedback.

In reply to I realized that the error I… by ms