Note: At 3:23 in the video, there's a mistake in the quadratic formula, in that I should have written the 7.00 factor as −7.00. The calculation is nevertheless correct since I plugged the numbers in correctly, although I took what in retrospect was a confusing shortcut by not writing negatives in front of either -4.9 and -7.00. 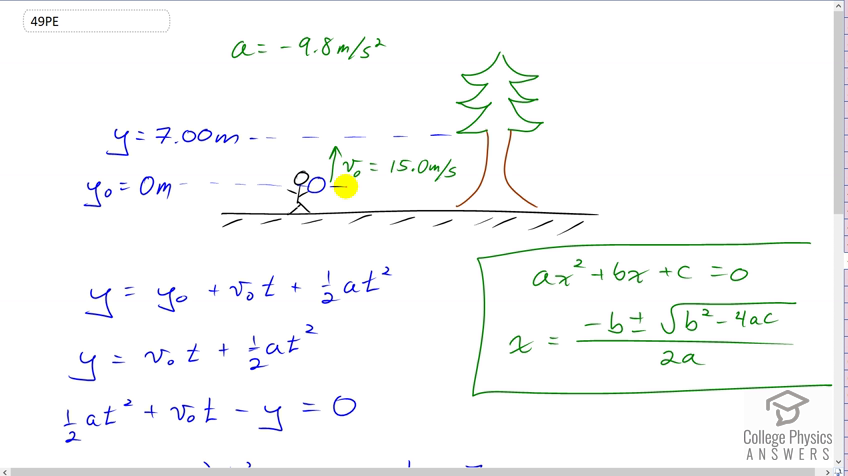 Video Transcript
This is College Physic Answers with Shaun Dychko. This person throws a ball upwards with an initial velocity of 15 meters per second. We'll take the initial position of the ball in the person's hand to be the initial height of zero meters. Then it passes a tree branch at a height of seven meters and the acceleration is negative 9.8 meters per second squared due to gravity. The question is how much time will pass between when the ball initially reaches this height, goes up and then comes back down to the same height again. We're going to use the quadratic formula here to solve for t and our job will be to figure out what is the time at which the ball first passes this height on its way up, and then what is the time when it reaches this height again on the way down, then we'll take the difference between those two times. We'll subtract them to find the time between those two times. So, this formula will conveniently give us both of the times that we're looking for because it will tell us at what time is the ball going to be at such and such a height. We know that from the physics of the situation, by looking at it we can see that the ball will be at this height at two different times, once on the way up and then once again on the way down. This quadratic formula gives us two different answers because of the plus or the minus here in the formula. So the difference between those two times will be our interval between when the ball reaches this height and then returns to it again. Okay. So, our initial height here is zero, so the y naught term is gone and we're left with this line here. The position y equals initial velocity multiplied by time, plus one half times acceleration, times time squared. Then we'll rearrange this so that it is of the form of a quadratic equation and then we'll be able to more easily see which numbers here correspond to which letters in this quadratic formula a, b, and c. So we have one half at squared plus v naught t minus y equals zero. I get that by subtracting y from both sides, then switching these two terms around and then switching both sides of the equation around because this left side became zero and we'll switch it over to the right here, and have our unknowns on the left. We'll substitute now, the a in this equation here is the acceleration due to gravity. It is not the a of our quadratic formula but after we multiply by one half it will become that. So a in the quadratic formula being the factor multiplied by the squared term is going to be negative 4.9. Then b is going to be 15 and c will be negative 7. So we do substitution here into this quadratic formula and we have t, time, equals negative 15 meters per second, the negative coming from the formula there, plus or minus square root of 15 squared, minus 4 times negative 4.9, times 7. All that is divided by 2 times negative 4.9, This gives us two answers, once when we do the work with a plus and then a second time when we do the work with a minus. We get 0.57447 seconds is the time when the ball initially reaches the height of 7 meters on the way up, and then our second answer is 2.4868 seconds which is the time at which the ball reaches the height of 7 meters when it's on its way down. The time interval between those two events is the difference between those times and this gives us an answer of 1.91 seconds.

Hi tyler707, thanks for the question. At 3:22 in the video I'm seeing that the negative is indeed included in the "-4ac" term. If you're still seeing something different, let me know.
All the best,
Shaun

in the calculator screenshots, the 4.9 is positive

In reply to Hi tyler707, thanks for the… by ShaunDychko

Thanks for the question here oliviafabre1, you've actually clarified what tyler707 was asking. To clarify the factors: $a = -4.9$, $b = 15.0$, and $c = -7.00$. The calculator screenshot is correct after considering the three negative signs involved in the $-4ac$ term. There is the minus from the formula, and both $a$ and $c$ are negative. To be more clear in the calculator screenshot I could have also written $-4.9$ and $-7.00$, but the result is the same. At 3:23 in the video, there's a mistake however, in that I should have written the $7.00$ factor as $-7.00$.
Thank you for helping straighten this out. I'll put a note in the final answer section about the error in the video.

In reply to in the calculator… by oliviafabre1

if they ask what is b. What is the maximum height the ball reaches?
c. Find total time of flight

Hello bindangvu,
I think you can find other questions here asking questions like that. Try the search with "maximum height" and a filter for Chapter 3. You'll find 8 matches, and hopefully some of them will help.
All the best,
Shaun

In reply to if they ask what is b. What… by bindangvu