Conversations with astronauts on the lunar surface were characterized by a kind of echo in which the earthbound person's voice was so loud in the astronaut's space helmet that it was picked up by the astronaut's microphone and transmitted back to Earth. It is reasonable to assume that the echo time equals the time necessary for the radio wave to travel from the Earth to the Moon and back (that is, neglecting any time delays in the electronic equipment). Calculate the distance from Earth to the Moon given that the echo time was 2.56 s and that radio waves travel at the speed of light $3.00 \times 10^8 \textrm{ m/s}$. 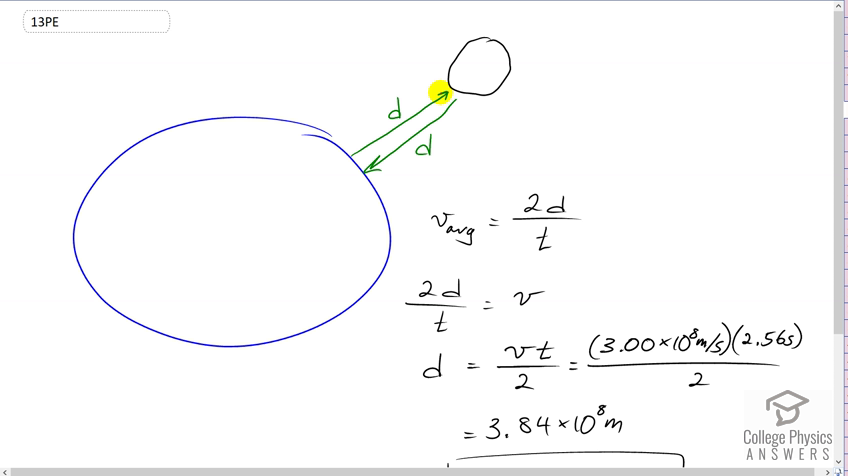 Video Transcript
This is College Physics Answers with Shaun Dychko The voice of the ground control in Cape Canaveral will be transmitted by radio waves to the astronaut on the moon. And then, a speaker in the astronaut's helmet would turn that radio signal into sound which would then go into the microphone of the astronaut's helmet and then be transmitted back as a radio wave to ground control again. And so, they would hear their own voice and this whole trip would take 2.56 seconds. And so, we know the speed of this signal, this signal is transmitted by light and that is a very well known speed by the way because light is... The speed of light is a one of these fundamental constants of 3.0 times 10 to the 8 meters per second. And, knowing how long it takes for this round trip of 2.56 seconds, we can figure out the distance between the Earth and the moon. And so, the speed of this light is going to be 2 times the separation between the Earth and the moon because it does a round trip, it goes once to the moon then and again it comes back. So, 2 times this distance divided by the time. And we're going to rearrange this formula to solve for d. This earth moon separation. So, we'll switch the sides around first of all, leaving us with this line. And I took away the average here because well, it's a bit annoying to write it, and secondly, we're talking about light here and light has only one speed. It is this fundamentally constant speed. So, you can't really think of an average as it's just one speed. And we'll multiply it by t over 2 on both sides cancelling the t and the 2 in the left isolating d there. And then introducing a t in the numerator here and a 2 in the denominator. So, the separation between the Earth and the moon is the speed of light times the time for this round trip divided by 2. So, that's 3 times 10 to the 8 meters per second times 2.56 seconds divided by 2, which works out to 3.84 times 10 to the 8 meters. And it's nicer to think about kilometers. So, we'll multiply this by a kilometer for every 1000 meters and that works out to... Well, 1000 is 10 to the 3. So, 10 to the 8 divided by 10 to the 3 is 10 to the 8 minus 3, which is 10 to the 5. You can subtract the exponents when dividing powers of the same base. And... So, and that works out to 384,000 kilometers. It's the answer for the distance from the earth to the moon.