A swan on a lake gets airborne by flapping its wings and running on top of the water. (a) If the swan must reach a velocity of 6.00 m/s to take off and it accelerates from rest at an average rate of $0.350 \textrm{ m/s}^2$ , how far will it travel before becoming airborne? (b) How long does this take? 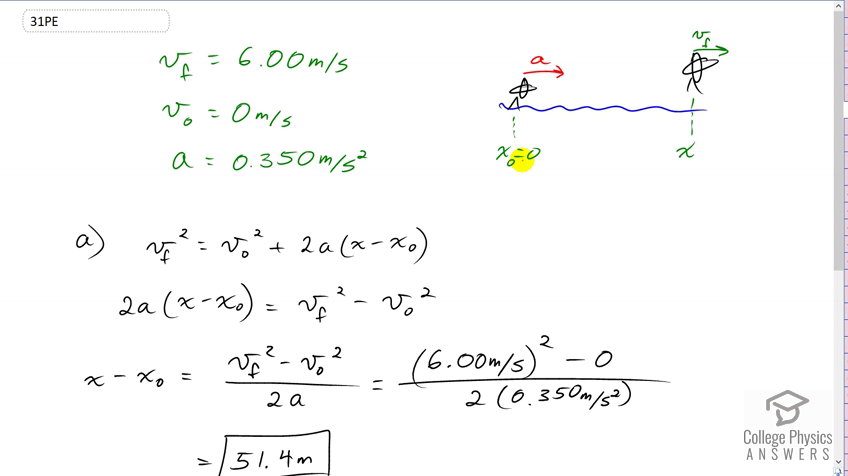 Video Transcript
This is College Physics Answers with Shaun Dychko This one which I've drawn in black because it's a black swan is initially at position 0 and it goes along the water running, trying to pick up speed till it gets to this magical final speed of 6 meters per second, at which point it can lift off into the air. Black swans are famous because they're very improbable. You can google black swan and it means much more than you think it should mean. Anyway, so, acceleration is this, final speed is that. Initial speed is 0. Writing down the information from the question as usual. And there, at the beginning of our solution, in order to organize the data and organize our thoughts. Now, for Part A, we need to figure out over what distance does this acceleration occur until the black swan reaches this takeoff velocity. So, we know that final velocity squared is initial velocity squared plus 2 times acceleration times displacement, the difference between the final and the initial position. And we're going to rearrange this to solve for x minus x naught. And, first we'll subtract v naught squared from both sides and then switch the sides around, and we have to 2a times x minus x naught on the left, and then v f squared minus v naught squared on the right, and then divide both sides by 2a. And we have that the displacement will be the difference in the squares of the velocities - final and initial divided by 2 times acceleration. So, that's 6 meters per second squared divided by 2 times .35 meters per second squared. And that gives 51.4 meters. It's the distance this one runs while picking up speed for take off. And part B asks how long will this take and there are a couple of different formulas we could use. We have new information here about the distance over which this one accelerates and we could use that in a formula involving distance, but we won't because we don't want to use a number that we've calculated in our subsequent work, because if there is a mistake in this number 51.4, then it would also make the next stuff we do wrong as well. So, we best practiced is to use a formula that contains only information given directly by the question. And this is more than enough to use this formula to find time. So, we have final speed equals initial speed plus acceleration times time. And let's subtract initial speed from both sides because our job here is isolate t and switch the sides around. And we have at equals v minus v naught. And then, divide both sides by a. And we are left with t isolated on the left equals final speed minus initial speed divided by acceleration. So, that 6 minus 0 over .35 giving us 17.1 seconds.

Why were you able to use V = Vo + AT when acceleration isn't constant?

Hi vthai, thanks for the question. From what I can tell, the acceleration is constant. Is there something that suggests otherwise?