A coin is dropped from a hot-air balloon that is 300 m above the ground and rising at 10.0 m/s upward. For the coin, find (a) the maximum height reached, (b) its position and velocity 4.00 s after being released, and (c) the time before it hits the ground. 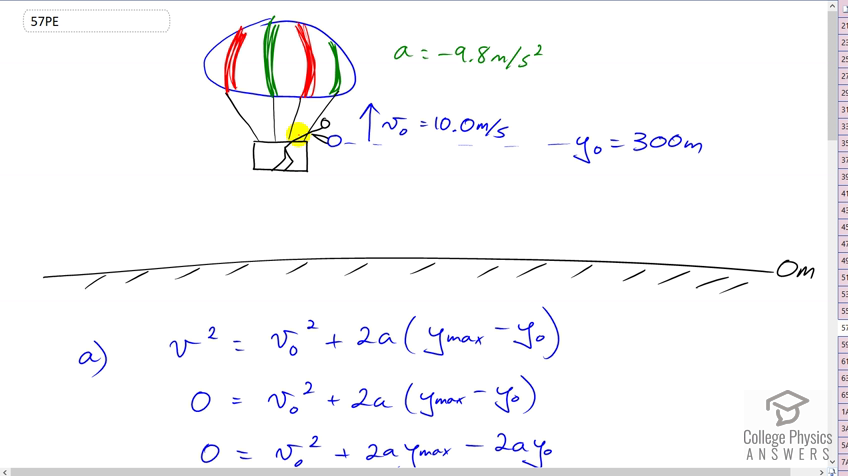 Video Transcript
This is College Physics Answers with Shaun Dychko. This hot air balloon is moving upwards at 10 meters per second so that means this coin that the person in the basket releases is also going to be moving up at 10 meters per second initially. So that's what v naught is, 10 meters per second upward. The acceleration is that due to gravity of negative 9.8 meters per second squared. We'll take this initial position of the coin to be 300 meters above the ground and ground is position zero. Part A asks us to find out what is the maximum height that this coin will reach after it's released. This formula here is the ticket because we can say that the final velocity of the coin at the very peak of its travel will be zero. That equals v naught squared which we know plus two times acceleration and acceleration we know, times the y max which we have to find, minus the initial height which we are given. So we'll do some algebra here to solve for y max. We replace v squared with zero 'cause the maximum or the velocity at the maximum height is zero and equals v naught squared plus two a times y max, minus y naught. Then distribute the two a among the terms in the bracket and that gives us zero equals v naught squared plus two a y max minus two a y naught. Then we'll add two a y naught to both sides and subtract v naught squared from both sides and then switch the sides around. We end up with positive two a y naught and then minus a v naught squared on one side and we have a two a y max on the other side. Then divide both sides by two a. When this term get divided by two a, the two a's cancel leaving us with y naught and then when this term gets divided by two a, you just have to write it there. So we have the maximum height is the initial height minus the initial velocity squared, divided by two times the acceleration which is 300 meters, minus 10 meters per second squared, divided by two times negative 9.8 meters per second squared, giving us a maximum height of 305 meters. Part B asks us what will the height be at 4 seconds after the coin is released and what will its speed be at that time. Or where does it ask for velocity? It asks for velocity actually, so it's good to that we have that negative there. So position first, the y equals initial position plus initial velocity, times time, plus one half times acceleration, times time squared. This is just a plug in jug question, we don't need to do any algebra or anything fancy so we have 300 meters plus 10 meters per second times four seconds, plus one half times negative 9.8 times four squared, giving us 262 meters will be its position above the ground after four seconds. Its speed or velocity at that time will be the initial velocity, plus acceleration times time. So that's 10 meters per second upwards initially, plus negative 9.8 meters per second squared acceleration, time four seconds, giving us negative 29.2 meters per second. So it is going at a speed of 29.2 in the downward direction. When you say negative that means downwards here in this coordinate system where we've taken upwards to be positive, and so the velocity is negative 29.2 meters per second. Lastly, we want to find the time at which the coin hits the ground and that means the final height will be zero because we've defined the ground to be our reference level and it's defined as zero. Then I've moved things around a bit just so that it has the form of a quadratic equation so that we have the quadratic term first and then the term with exponent one coming next and then the term with just a number, it's a constant term, no variable there, as the last one. So that's the same form as ax squared plus bx plus c equals zero, the usual way to write a quadratic equation. There's a quadratic formula that we can use to solve that and I've substituted in for the variables that we know here. So a is negative 9.8 meters per second squared, that times a half makes negative 4.9 as the coefficient of t squared, and then we have 10 meters per second for the initial velocity. So 10 is the coefficient of the linear term, and then plus the initial height of 300 meters, and all that equals zero. So t is going to be negative of the coefficient of the linear term, plus or minus the square root of the coefficient of linear term squared, minus four times the coefficient of the quadratic term, and then times by the constant term. All that gets square rooted and then everything gets divided by two times negative 4.9, giving us a solution of 8.91 seconds is the time at which the coin will hit the ground.