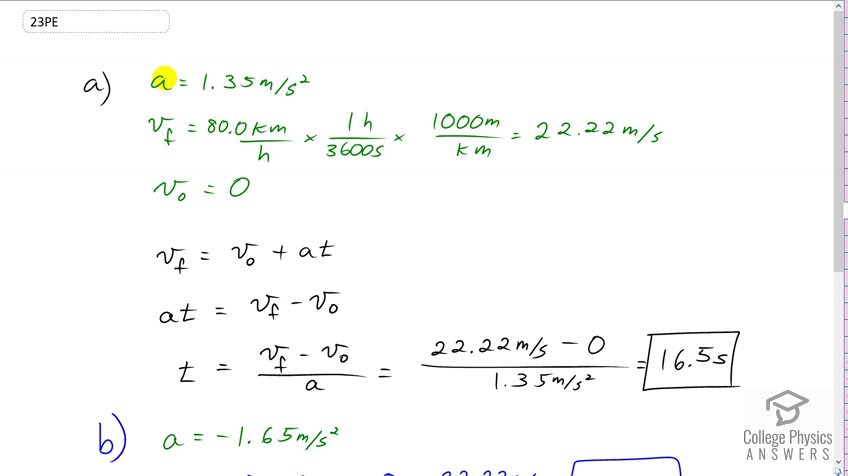 Video Transcript
This is College Physics Answers with Shaun Dychko We begin this question in the usual way by writing down the information that we're given. We're told that the light rail commuter train accelerates at 1.35 meters per second squared. It has a final top speed of 80 kilometers per hour and it's going to come to rest... or sorry. It starts at rest, I should say. And our job is to figure out how long does it take for it to reach this top speed given that it starts at rest. Now, when we're writing down the data, that's a good time to take care of any unit conversion issues. Most of our formulas require MKS units that stands for meters, kilograms and seconds. And you should convert all of your information you're given into these 3 - meters, kilograms and seconds. So, in this case, we have kilometers, which is not good. We want meters. And we have hours, which is not good. We want seconds. So, we multiply it by 1 hour for every 3600 seconds. And you could have multiplied by 1 hour for every 60 minutes and then times by 1 minute for every 60 seconds. I just happen to have it memorized that there are this many seconds in an hour. Then, times by 1000 meters per kilometer, and so the kilometers cancel and the hours cancel, leaving us with meters over seconds. And this is 22.22 meters per second. So, the formula we start with is that the final speed is the initial speed plus acceleration times time. And then, we'll subtract initial speed from both sides and also switch the sides around, so that we have at on the left and v f minus v naught on the right. And then, divide both sides by a. And we have time is final speed minus initial speed divided by acceleration. So, that's 22.22 meters per second minus 0 divided by 1.35 meters per second squared. And that gives 16.5 seconds. It is the time it takes for the train to reach 80 kilometers per hour when it starts at rest. When the train is stopping, a typical stopping acceleration is negative 1.65 meters second squared. So, this is just the regular brakes as opposed to the emergency brakes that he uses down here in part C. So, in part B, we are going to reuse this formula for time. And, we have a final speed of zero in this case. And then, initial speed is the top speed of 22.22 meters per second and we divide that by a negative 1.65 meters per second squared, giving us 13.5 seconds as a time for the train to stop. And then, in an emergency, it can do the stopping in 8.3 seconds if it has to. And our job is to figure out what acceleration it would be experiencing, given this stopping in this period of time. So, the top speed again is 22.22 meters per second. So, 0 minus that, divided by 8.3 seconds and that gives negative 2.68 meters per second squared. It's the acceleration in an emergency.