Standing at the base of one of the cliffs of Mt. Arapiles in Victoria, Australia, a hiker hears a rock break loose from a height of 105 m. He can't see the rock right away but then does, 1.50 s later. (a) How far above the hiker is the rock when he can see it? (b) How much time does he have to move before the rock hits his head? 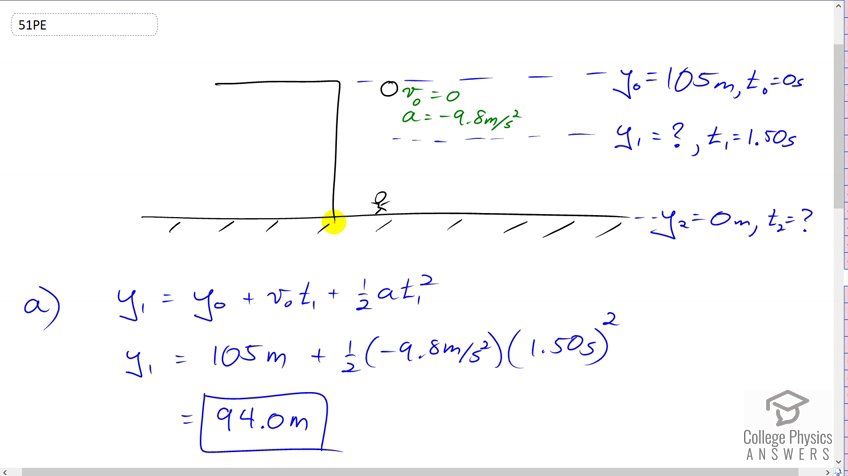 Video Transcript
This is College Physics Answers with Shaun Dychko. We start this question by drawing a picture which is often a really good strategy for setting up a question in order to understand how to solve it. We also write down the information we're given, of course. It's a good routine. This rock falls off the cliff and then we presume that the initial velocity is zero. Its acceleration will be that due to gravity of negative 9.8 meters per second squared, where we're taking down to be the negative direction and up to be positive. Its initial height we're told is 105 meters, and we're taking this position of the hiker to be, we'll call it y subscript two, and we'll take that to be zero meters. This rock is going to fall a little ways until it gets to this position here, which we'll call y subscript one and we don't know what that position is. Part A is to figure out what is that height above the hiker. But we know that it reaches this position at t one which is 1.5 seconds. Then the question for part B is, how much time passes between when the hiker initially notices the rock, when it's at this level here at time t one, and when the rock reaches the hiker's position which is t two. So how much time does the hiker have to move out of the way of this rock. That's the time between here, t one, when the hiker notices the rock, and here when the rock reaches the hiker's height. So, we have this formula for position, and I'm writing in a subscript one here which usually I don't write, but in this question we have three different heights to think about and so it's better to label each of them with their own subscript. So we have y one which is this height when the hiker notices the rock equals the initial height y naught, plus the initial velocity times t one, plus one half at one. So the subscript one for the time t refers to the time at this height y one. The a does get a subscript because it's a constant at all times here. There's no need -- you could write a subscript if you wanted but there's no need because acceleration due to gravity is not going to change as the rock falls. The initial velocity is zero, and so that term disappears. So we have y one equals 105 meters initial height, plus one half times negative 9.8 meters per second squared acceleration due to gravity, multiplied by the 1.50 seconds squared. That gives us 94.0 meters is the position of the rock when the hiker first notices it. That is 94 meters above the hiker because we've taken the hiker's position to be defined as zero meters. Okay. Then in part B, we're going to figure out what is this time t two when the rock reaches the hiker's level. We'll subtract t two from t one to figure out the time interval during which the hiker has a chance to move out of the way. So we have the same formula here re-written. But we have different subscripts now. I didn't bother writing the linear term at all because there is not initial velocity. It's starting from rest, this rock, and so the y two height which is zero, but you know, let's just keep it as a variable for a second, equals the initial height y zero at the top of the cliff, plus one half times acceleration, times t two, this time when the rock reaches the hiker's level which we're going to figure out, and that t two is squared. We will subtract y naught from both sides and then switch the sides around so we have our unknown on the left. So that's one half at two squared equals y two minus y naught, and then multiply both sides by 2 over a leaving us with t two squared is 2 times y two minus y naught, all over a. Then take the square root of both sides and we have this time t two then is plus or minus the square root of 2 times y two minus y naught over two a. Sorry there's -- that 2 shouldn't be there in the bottom, where did that come from? Okay. So, yeah. Plus or minus square root of 2 times y two minus y naught over a. So we have plus or minus square root of 2 times zero which is its final position at the hiker's level, minus 105 meters, all over negative 9.8 meters per second squared. We get 4.6291 seconds and we'll take the positive because that is the sign that makes physical sense. Negative 4.6 seconds would not make sense. So the time difference between when the hiker initially sees the rock and when the rock reaches the hiker's level is 4.6291 seconds minus 1.50 seconds and so the hiker has 3.13 seconds to move out of the way of the falling rock.

How come you did not use the quadratic formula in this solution and other ones we do?

I wonder about using the quadratic formula also. BUT, I can't get it to work out with it. I get a sum of m^2 and m^2/s^2 under the radical sign. ??

Hi blueFZ07, thank you for the question. We're talking about part (b), right? Since there is no initial velocity downward, the linear term is zero. The linear term is the term with exponent 1 for $t$. It's the term with the factor $v_0$, which is zero. With no linear term we can solve for $t^2$, then take the square root of both sides - no quadratic formula required. Under the radical sign there should be a fraction with the difference of meters in the numerator, divided by meters per second squared in the denominator. This works out to seconds after taking the square root.
Hope this helps,
Shaun

In reply to I wonder about using the… by blueFZ07