(a) Calculate Earth's average speed relative to the Sun. (b) What is its average velocity over a period of one year? 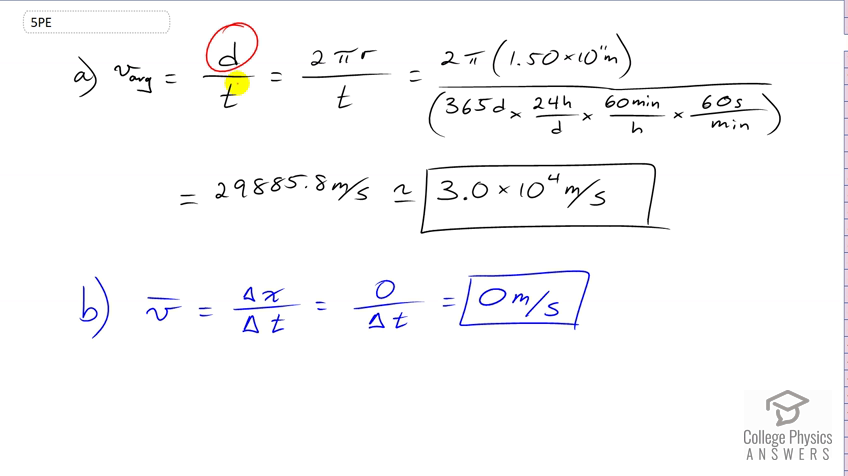 Video Transcript
This is College Physics Answers with Shaun Dychko To calculate the earth's average speed around the sun, we need to know the distance traveled divided by the time it takes to travel that distance. And we need to make an assumption about the Earth's orbit and we will assume that the earth is this relatively blue ball because it is covered so much in water. Going around this sun, which we’ll say is red since that’s a color of heat. And, we're going to assume that the earth is going around the sun in a circle, with the sun at the center of that circle. But that's... It's a good enough assumption for this question, but it's not precisely true. The earth actually goes in an elliptical orbit around the sun, where, you know, one... and that orbit is closer to the Sun than the other end. But anyway, but all that to say that we're going to use the formula 2 Pi r for the circumference of a circle in order to calculate the distance traveled by the Earth in one year. So, that is 2 times Pi times the average distance from the earth to the sun, that being the radius of the circle – 1.5 times 10 to 11 meters. And, we will divide that by the time it takes to complete one circle. So, that's 365 days or more technically 365.25 days, but there's no sense trying to be precise here when we've already made this assumption of the earth going in a circle, which it really isn't. So, this 3 significant figures will be fine there. 365 days. And typically, speeds are given in units of meters per second. And so, we're going to convert this day time unit into seconds in the denominator here. So, we have to multiply by it 24 hours per day so that the days cancel. And, this being a fraction over 1, by the way. So, you can see that the days are in the numerator here and then in the denominator here. Multiply that by 60 minutes per hour and then by 60 seconds per minute, leaving us with units of seconds in the denominator, and then multiply it through by 365 times 24 times 60 times 60. And then, that is the denominator of this fraction and that works out to 3.0 times 10 to the 4 meters per second. It’s the average speed. Now, in part B, we’re asked to find the average velocity, and when you hear the word velocity, you really have to put your thinking cap on because it is a measure of the displacement over the time and because the earth returns to its original position after one year, the velocity is zero because there is no displacement. It’s back in its original position. There we go.

Where are you finding the "r" value, is it supposed to come from table 1.3?

where does the r value come from?

Hi Raygan, thank you for the question. $r$ is the average Earth-sun distance in the textbook appendix.
All the best,
Shaun