A basketball referee tosses the ball straight up for the starting tip-off. At what velocity must a basketball player leave the ground to rise 1.25 m above the floor in an attempt to get the ball? 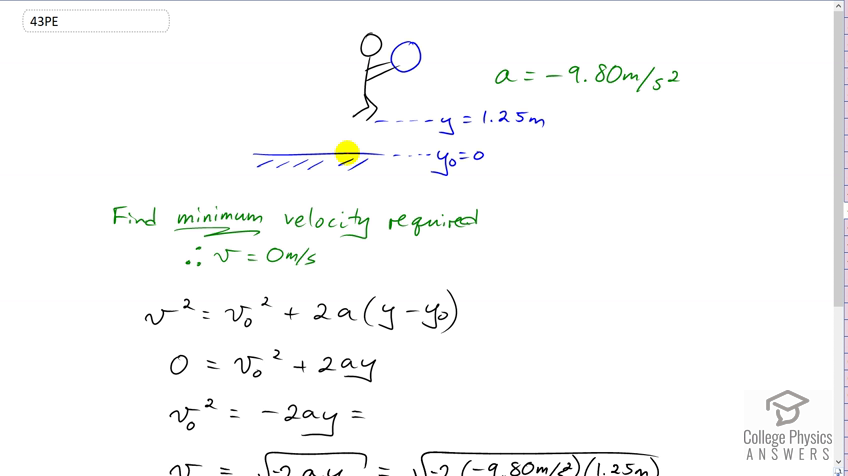 Video Transcript
This is College Physics Answers with Shaun Dychko. The basketball referee throws the ball 1.25 meters up in the air and the question asks us what velocity should the basketball player leave the ground with, in order to reach that height. Now, technically speaking there are actually many answers to that question. There are lots of velocities that it could, the player could leave the ground with to reach that height. But I think what it is implying is what is the minimum velocity needed to just barely reach that height, in which case, once reaching that height, the final velocity will be zero meters per second. And so we're going to calculate assuming that they mean minimum. We can't answer the question if we don't assume that. So, we use this formula, final velocity squared equals initial velocity squared, plus two times acceleration, times the change in position. I'm using the letter y for position here just because we're dealing with the vertical axis. But normally I've been writing x's there 'cause we've been dealing with things that are horizontal. It doesn't really matter what letters you use. Now, the final velocity is zero and so that term becomes zero here. The initial position is zero and so this becomes 2ay and then we're going to subtract 2ay from both sides and switch the sides around, so that the initial velocity with which the player leaves the ground squared, equals negative two times acceleration, times the final height. And we'll take the square root of both sides. Technically speaking, this should be a plus or minus square root there but we know that since the player is going upwards, and we've defined downwards to be the negative direction that means upwards is the positive direction. And so this velocity we can tell from the physics of the situation must be positive. So we take the positive square root here. So we have positive square root of negative two, times acceleration, times the final position. So that's negative two, times negative 9.8 meters per second squared acceleration, times the final height of 1.25 meters. And that gives 4.95 meters per second is the minimum velocity with which the player should leave the ground in order to reach this height of 1.25 meters. Any velocity greater than this also would reach that height but then surpass it, and so that's why to say what velocity should they leave the ground with, is a bit ambiguous because there are any velocity bigger than this would work, or equal to it. So, but this becomes the answer when we say what minimum velocity should they leave the ground with.