Skip to main content
Advanced search
Question
(a) A world record was set for the men's 100-m dash in the 2008 Olympic Games in Beijing by Usain Bolt of Jamaica. Bolt “coasted” across the finish line with a time of 9.69 s. If we assume that Bolt accelerated for 3.00 s to reach his maximum speed, and maintained that speed for the rest of the race, calculate his maximum speed and his acceleration. (b) During the same Olympics, Bolt also set the world record in the 200-m dash with a time of 19.30 s. Using the same assumptions as for the 100-m dash, what was his maximum speed for this race?
Question by OpenStax is licensed under CC BY 4.0.
Final Answer
Solution Video 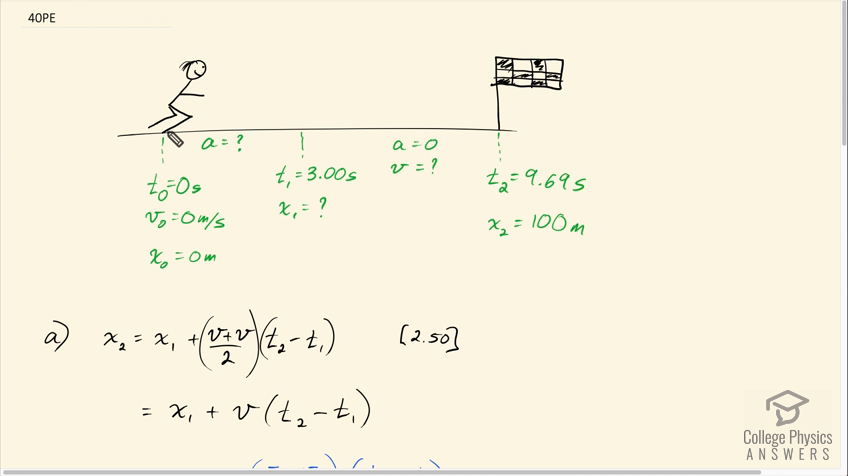 In reply to Why do we know to choose… by anaelle.legrain

Why is v the same in both of the equations?

Hi Jaren,
Sorry for taking so long to get to this question. I just noticed it since someone else asked something related to the same solution. It's probably past time to be helpful for your course, but I'll answer anyway for the benefit of others. $v$ is the same in both equations for distance in part (a) since it represent Usain's maximum speed. During $x_1$ it's Usain's final speed during that portion of displacement. During $x_2$ it represents the maximum speed that he's able to maintain constantly during the portion of displacement $x_2$. It's necessary to use two separate equations since our equations all assume constant acceleration. Over the entire race, Usain's acceleration is not constant, since it's zero for much of it. To deal with that, we separately consider each part of the race during which acceleration is constant and known during that portion of displacement.

Thanks for all the details. I learned SO much.