Skip to main content
Advanced search
Question
In an experiment the following observations are made by a student for four charged objects W, X, Y, and Z. Estimate whether the charges on each of the four objects are positive, negative, or neutral. Note that this question has been modified slightly since the original version found in the OpenStax text has no possible solution.
Question by OpenStax is licensed under CC BY 4.0.
Final Answer

X and Y are both positive, and W and Z have one of the following states: 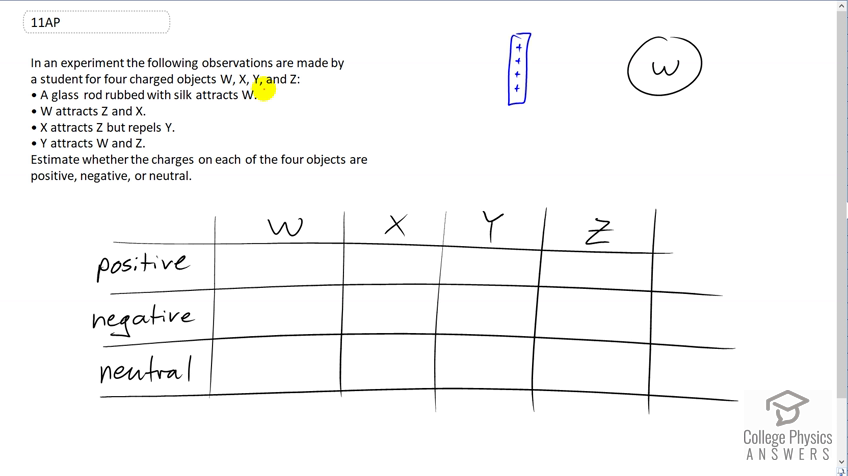 Start My Free Week
Trustpilot
Log in
View sample solution
Rating
Video Transcript
This is College Physics Answers with Shaun Dychko. There's an experiment here where some objects W, X, Y and Z have charges or maybe they're neutral. And some of them attract and some of them repel each other. So basing this observations, figure out whether the different objects are charged and if they are, whether it's positive or negative. So, the first bullet point here, it says that the glass rod is rubbed with silk and that means we're sure that the glass rod is positively charged based on what the textbook has told us about glass rods being rubbed with silk. So when it attracts this object W, it means either object W is negatively charged, in which case oppositely charged things attracts or it could mean that object W is a neutral object and there's an induced polarization causing the negative charges to be on the side closest to the glass rod. And this is what's causing the attraction. So this first bullet point is ambiguous as to what's happening with object W. But we can write down what the possibilities are anyway. So we know object W is either negative or it's neutral. Those are the two possibilities right now. And then we consider the other bullet points. So, object W attracts objects Z and X. So this means that either X is positively charged and object W can be either negative or neutral, in which case would be this attraction. If object W is neutral, then this positive charge on the X object would induce polarization on object W in the same way if this was neutral, it had an induced polarization. And the other possibility is that X could be neutral while W is negative. So, not much we can really say there, except to write down these possibilities. And then bullet point three, X attracts Z but repels Y. Now when something repels, that tells us something definite about it. It means that definitely object X is charged, it is not neutral. And in order for it to repel object Y, and Y also is charged with the same charge as X. And so X cannot be neutral. So, we can put in X here, that is not possible because it's repelling object Y. And Y has the same charge as X. And so these are both definitely positive. And we can put little Xs here, I guess to exclude any of this other possibilities. We know for sure that both X and Y are the same charge and they're positive. Now, object Y attracts W and Z. So, now for object Y to attract object Z, Z has to either be negative or has to be neutral and the same goes for object W, to be attracted to object Y, could be negative or neutral. And now, we haven't quite nailed down exactly what the scenario is because we have two possibilities for Z and two possibilities for W. So, let's revisit this second bullet point here, and we see that W attracts Z. Now that means that they cannot both be neutral. If they're both neutral, they would not attract each other. And but what we cannot tell is which one might be neutral and which one might be charged. And they can't both be charged either, otherwise they would repel. And so W is either negative or neutral, and Z is either negative or neutral but they're W and Z are not the same. That's all we can really say. So, I guess our answer's going to have to be X and Y are positive and one of the following, could be either: scenario A: W is negative and Z is neutral or scenario B: W is neutral and Z is negative.