(a) On the figures below, draw an arrow showing the direction of the net force on each of the cars at the positions noted by the dots. If the net force is zero at any position, label the dot with 0. Description of Figure 4.43:

(b) i. Indicate which car, if either, completes one trip around the track in less time, and justify your answer qualitatively without using equations.

ii. Justify your answer about which car, if either, completes one trip around the track in less time quantitatively with appropriate equations.

Question Image
Question by OpenStax is licensed under CC BY 4.0.
Final Answer

a) see video
Note: At 0:56 in the video, there's an error with the direction of the arrow showing the net force. It's drawn to the right, suggesting the car is speeding up, but in fact car X is braking during the second half each straight section, so the arrow should be pointing to the left. 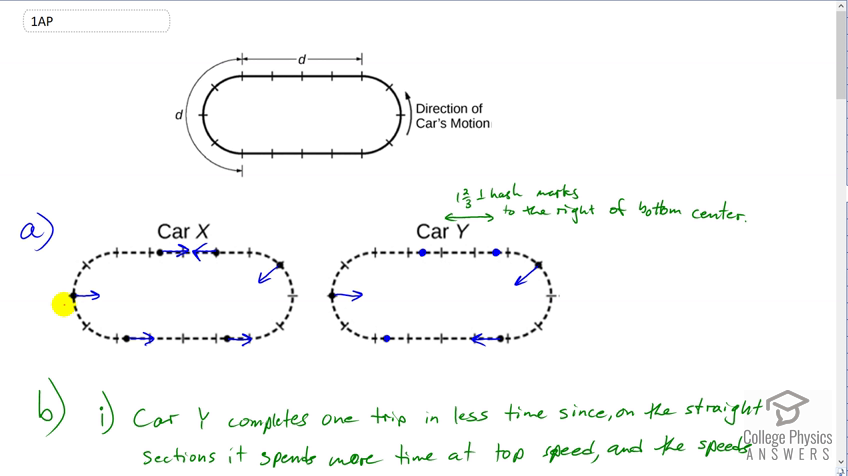 Can I get these videos for free I am 13 and using Openstax AP physics 1 textbook to learn physics. Pretty please.

Hello, yes, we have a program for students with financial hardship at this time. I have updated your account with free access for one year.
I hope the videos are helpful with your studies! Please tell your friends and classmates about College Physics Answers.
All the best,
Shaun

In reply to Can I get these videos for… by physics_learner23

If the track is cut into 4 sections of d, and car y spends just one fourth of a straight section accelerating, then why isn't the equation for that one part d/4= average v x t? Instead it is d/16? I'm confused about how the track is divided in the solution video. Thanks.

Hello daphnegricoski, thank you very much for your comment. As it turns out, I was misinterpreting what is meant by a "section". I was taking a section to be between two vertical tick marks, for a total of 16 sections. Now that I look at it again, the question means to say that a section is of length $d$, for a total of 4 sections, each of which is broken into 4 sub-sections. I've flagged this video for a re-do.

May I have these videos for free? I am using this for my senior year of highschool.

Hello Tomai, currently, during this pandemic, we're offering free access to students with financial hardship. Please email me directly at shaun@collegephysicsanswers.com if you think this would be a program suitable for you.

In reply to May I have these videos for… by tomai