Skip to main content
Change the chapter
Question
Calculate the maximum deceleration of a car that is heading down a slope (one that makes an angle of $6^\circ$ with the horizontal) under the following road conditions. You may assume that the weight of the car is evenly distributed on all four tires and that the coefficient of static friction is involved—that is, the tires are not allowed to slip during the deceleration. (Ignore rolling.) Calculate for a car: (a) On dry concrete. (b) On wet concrete. (c) On ice, assuming that $\mu_s = 0.100$, the same as for shoes on ice.
Question by OpenStax is licensed under CC BY 4.0.
Final Answer 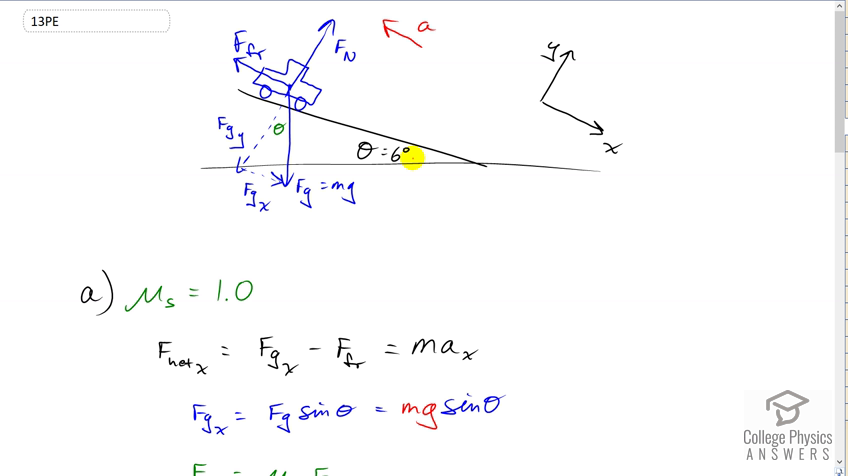 This is College Physics Answers with Shaun Dychko. In this question, we’re going to find the maximum deceleration that a car could have when it goes down this slope inclined at six degrees with three different surface conditions. In part a, we have rubber from the car tires on dry concrete for a coefficient of static friction of 1.0. Then in part b, it’ll be on wet concrete with a coefficient of static friction of 0.7. Then in part c, we assume the slope is icy with a static friction coefficient of 0.1. So we draw a free body diagram as we do for every question that we can in forces. I’ve rotated the coordinate system so that the <i>x</i>-axis is positive down the slope and the <i>y</i>-axis is perpendicular upwards and away from the slope. We expect a negative acceleration because the acceleration should be up the slope since we’re told the car is moving down and we want it to decelerate so that means acceleration is up the slope. This force of gravity needs to be resolved into two components, a component parallel to the slope and down which I call <i>Fgx</i> and then a component that is perpendicular to the slope <i>Fgy</i>. This angle in here is <i>theta</i> and we know that because this angle plus <i>theta</i> here adds up to 90 since this is a right triangle here with a right angle down there, since this gravity is straight down and this bottom line is straight horizontal. So this plus this angle has to make 90, and this plus this angle also has to make 90 since this <i>Fgy</i> is perpendicular to the slope. That means this angle here and the incline angle are the same, so that’s how we can say that this angle in this triangle here is <i>theta</i>. So the net force in the <i>x</i> direction is going to be positive <i>Fgx</i> down the slope and then minus force of friction up the slope. Let’s put the slope back. There. So this difference is the net force and so it is mass times acceleration, which I’ve labelled with a subscript <i>x</i> because it’s acceleration in the <i>x</i> direction. Now the <i>Fgx</i> is force of gravity times <i>sin theta</i> because <i>Fgx</i> is the opposite component of this blue triangle and so we multiply <i>sin theta</i> by the hypotenuse and the hypotenuse is force of gravity which is <i>mg</i>, so <i>Fgx</i> is <i>mg sin theta</i>. Then the force up the slope, friction, is the coefficient of static friction multiplied by the normal force. And so we can rewrite <i>Fnet x</i> as <i>mg sin theta</i> for <i>Fgx</i> and then minus <i>mu k</i> or <i>mu s Fn</i> substituted for force of friction, and all that equals <i>ma x</i>. Now the normal force is something we also need to substitute for, so we turn our attention to the <i>y</i> direction. In the <i>y</i> direction there’s no acceleration and so that’s why we can write zero there. Mass times acceleration is zero in that case because there’s no acceleration perpendicular to the slope, the acceleration is only along the slope. Having an acceleration perpendicular to the slope would mean the car would be flying or be buried in, going into a hole into the slope, which is not happening. So we can add <i>Fgy</i> to both sides here because we know the normal force is in the positive <i>y</i> direction and the <i>Fgy</i> is in the negative <i>y</i> direction so we have <i>Fn</i> minus <i>Fgy</i> there. So we add <i>Fgy</i> to both sides to solve for <i>Fn</i> and it’s going to equal the force of gravity <i>y</i> component and the force of gravity <i>y</i> component is <i>mg</i> times <i>cos theta</i> and it’s cosine because we’re finding the adjacent leg of this blue triangle, multiplying it by the hypotenuse. So we substitute <i>Fn</i> is <i>mg cos theta</i> in our net force in the <i>x</i> direction formula. So <i>Fn</i> becomes <i>mg cos theta</i> here, and so we have a formula for acceleration in the <i>x</i> direction now because we can divide both sides by <i>m</i> here, divided by <i>m</i>, divided by <i>m</i>, and the <i>m</i>s disappear. We have <i>a x</i> equals <i>g</i> which I factored out because it’s a common factor between these two terms. We have <i>g</i> times <i>sin theta</i> minus <i>mu s cos theta</i>. So there’s our formula that we can use to answer parts a, b and c. We just substitute different values for the coefficient of static friction in each case. So we have 9.8 meters per second squared times sine of six degrees minus one times cosine of six degrees, gives us negative 8.7 meters per second squared. We have the negative that we expected, that means acceleration is up the slope, the car will be slowing down because it is moving down the slope we’re told. Then in part b, we have 9.8 times sine of six minus 0.7 times cosine of six. 0.7 is the coefficient of static friction between rubber and wet concrete. And that is negative 5.8 meters per second squared is our maximum deceleration. Then if the slope is icy, we end up with 0.05 meters per second squared as our deceleration but we can’t really call it that because this is now positive. This means the car will be speeding up when it’s going down the slope, so when the car puts its brakes on, it will nevertheless continue to speed up. All it can do is minimize its acceleration, and so its minimum rate of speeding up will be 0.05 meters per second squared on an icy slope.

It says that car is heading down, while in your solution it is heading up the hill.

Thanks for the comment. Are you referring to the force arrow pointing up the slope? That is the force of friction, which is acting in the opposite direction to the car's motion down the slope. Friction is up the slope, whereas velocity is down the slope.
Hope that helps,
Shaun

In reply to It says that car is heading… by damonkk747

Why are we using Static Friction for a situation when the car is moving and is coming to a stop... Why can't we use the kinetic friction?

Your free body diagram looks wrong for an object that is rolling. You have the friction opposing the motion of the object but its opposing the motion of the object that is making contact with the surface which is the tire, and because the tire is rotating, it's going opposite to the direction the tire is going, therefore, the friction should be going in the same direction as the motion of the car. Think of it this way, if the car was going up the incline, then based on your reasoning, the friction would be going down the incline but so is the parallel component of the weight. Therefore, since both the parallel forces would be going down the incline, then it'd be impossible for a car to accelerate up an incline which isn't true. You have the direction of friction correct if you had a block on an incline, but it should be different when you have something rolling on an incline.

If you're accelerating down the ramp (pressing the gas pedal) then yes the friction where the tire meets a surface would be in the same direction. For this question breaks are being applied and the tires are opposing the direction they are rolling. Just like If you slammed on the breaks (tires stop rolling) and slid down the ramp the kinetic friction would also be back up the ramp.

In reply to Your free body diagram looks… by ryantmccauley@…