Skip to main content
Advanced search
Question
Calculate the speed a spherical rain drop would achieve falling from 5.00 km (a) in the absence of air drag (b) with air drag. Take the size across of the drop to be 4 mm, the density to be $1.00 \times 10^3 \textrm{ kg/m}^3$, and the surface area to be $\pi r^2$.
Question by OpenStax is licensed under CC BY 4.0.
Final Answer

Please note that the video has the wrong final answer for part (b) as a result of making an error in plugging numbers into my calculator. The current calculator screenshot is correct, and the answer above is correct. Please just ignore the final answer written in the video. 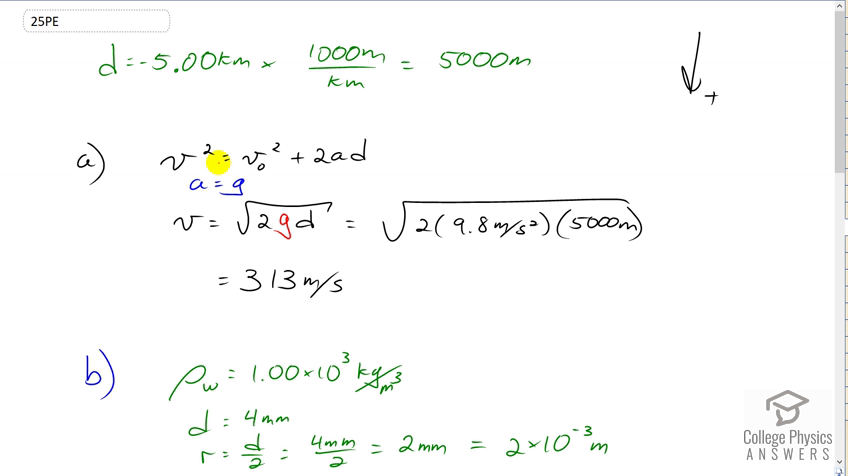 This is College Physics Answers with Shaun Dychko. We are going to calculate the terminal velocity of a spherical raindrop falling five kilometers. So in part a, we assume there’s no drag force in which case we can use this kinematics formula, which says the final speed squared is the initial speed squared plus two times acceleration times the displacement. We’ll take down to be the positive direction and that means acceleration is going to be equal to <i>g</i>, the acceleration due to gravity. The initial speed is zero and so this formula reduces to <i>v</i> equals the square root of <i>2gd</i> after you take the square root of both sides and substitute <i>g</i> for acceleration <i>a</i>. So that’s going to be the square root of two times 9.8 meters per second squared times 5000 meters and that gives 313 meters per second is the terminal velocity if there’s no air drag. And this 5000 meters is the conversion of five kilometers into meters by multiplying by 1000 meters per kilometer. Then in part b, we’ll assume that there is some drag force. So we need to, well write down the information we’re given first of all. We’re told that the density of water is 1000 kilograms per meter cubed and the diameter of this spherical drop is four millimeters and we want to find its radius because that’s what appears in a lot of our formulas for area, <i>pi r</i> squared and for mass which is density of water times volume, we have the volume is four thirds <i>pi r</i> cubed. So let’s divide that diameter by two which is two millimeters and that is two times ten to the minus three meters. So drag force is one half times the drag coefficient times the density of the fluid, which is air so I’ve put a subscript <i>A</i> for air there to distinguish it from the density of the water, and multiply that by the cross sectional area of the drop and times it by its speed squared. Now at terminal velocity, they will not be accelerating and that would mean that the drag force equals the weight <i>mg</i>. So let’s figure out what <i>m</i> is by multiplying the density of water by the volume of this sphere so that’s density of water times four thirds <i>pi r</i> cubed and we know that the area of the drop is <i>pi r</i> squared, the question tells us to assume that. We’re going to make substitutions now into the drag force and we’re also going to equate this two. So we’re writing the drag force formula on the left by writing <i>pi r</i> cubed in place and we’re writing <i>mg</i> on the right but instead of <i>m</i>, we’re writing <i>rho w</i>, density of water, times four thirds <i>pi r</i> cubed. Then we do some algebra to solve for <i>v</i>. We’re going to first cancel the <i>pi</i>s on both sides and divide both sides by <i>r</i> squared, which makes this <i>r</i> to the power of one, and then multiply both sides by two over <i>C rhoA</i> and you get this line here after you also take the square root of both sides. So the two times the four makes eight, so it’s the square root of eight times the density of water times the radius of the drop times <i>g</i>, and then divided by three times the drag coefficient times the density of air. So square root of eight times one times ten to the three kilograms per cubic meter, density of water, times two times ten to the minus three meters, which is the radius, times 9.8 meters per second squared, divided by three times 0.45, it was a little ambiguous about what number to choose for the drag coefficient so I just took the generic sphere figure that was given in our table of drag coefficients that is Table 5.2, and then multiplied that by the density of air, 1.21 kilograms per cubic meter. This gives a speed of 7.75 meters per second will be the maximum speed of the drop with drag, which is very significantly smaller than with no drag.

In the problem of part b you have 8/3 in the square root, but in your calculator you have 5. Is that an error?

Nice catch marievillafuerte! Yes, that was an error. I've corrected it by uploading an updated calculator screenshot and changed the final written answer.

Thanks again, and best wishes with your studies,