Skip to main content
Change the chapter
Question
A 560 g squirrel with a surface area of $930 \textrm{ cm}^2$ falls from a 5.0-m tree to the ground. Estimate its terminal velocity. (Use a drag coefficient for a horizontal skydiver.) What will be the velocity of a 56-kg person hitting the ground, assuming no drag contribution in such a short distance?
Question by OpenStax is licensed under CC BY 4.0.
Final Answer
Solution Video 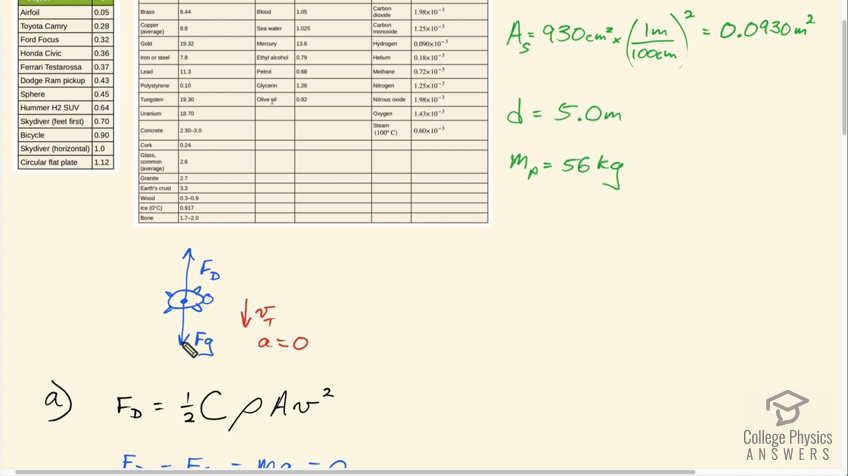 This is College Physics Answers with Shaun Dychko. A squirrel is falling out of a tree and there's some drag force applied by the air upwards and some gravity downwards. The question is what would this girl's terminal velocity be? That's the point where there's no acceleration. That's when the drag force equals gravity. We have an expression for drag force here, it's one half times this drag coefficient multiplied by the density of the fluid that it's going through, the density of air in other words, multiplied by the cross-sectional area of the squirrel that's sort of exposed to the air. This is the the effective area that the that is traveling through the air. If it was a sphere, suppose, the cross-sectional area would be this circle, so it would be the area of a circle through the middle of the sphere. For the squirrel, we're told what its total surface area is which is not the area that we'll plug into this formula. This is the area of the bottom and the top and the sides of the circle or the squirrel added together. What we'll have to do is make an assumption about how much of this area is effectively traveling through the air. Basically, you have to ask yourself, what flat object the area of such an imaginary flat object, how would that area be for this particular thing that's actually moving? For this squirrel, let's assume that the area exposed to the air is half of this total surface area. We'll assume that the squirrel is like a flat thing like a plate and the surface area that we're given is the area of the bottom plus the area of the top. By dividing by two, we're taking just this cross-sectional area that's traveling through the air. Then we multiply it by the speed that is traveling squared. We have a bunch of data that we need, one being the drag coefficient, which we're told to assume as a horizontal skydiver. We also need to know what the density of air is. It's 1.29 times 10 to the minus 3 multiply by 10 to the 3. In other words, 1.29 kilograms per cubic meter. Then in the second part of this question, we say what would the final velocity be of a person falling five meters? For part A, we're going to say that the drag upwards minus gravity down equals mass times acceleration but the acceleration is zero since we're figuring out the case where there was terminal velocity, in which case the drag force equals gravity, which is <i>mg</i>. We plug in <i>mg</i>in place of drag force here. That equals this formula for the drag force. Now the area we'll assume is half of the total surface area. That's <i>mg</i> equals one half see rho, surface area over 2 times speed squared. Then we have to do some algebra to solve for <i>V s</i>. We're going to multiply both sides by four because that's what this product of these two denominators is. Then divide both sides by the drag coefficient and the density and the surface area. Then take the square root of both sides. We have the final speed is going to be square root of 4<i>mg</i> over drag coefficient times density of air times cross-sectionals area. That's square root 4 times 0.56 kilograms times 9.8 Newtons per kilogram divided by 1 times 1.29 kilograms per cubic meter, times 0.0930 squared meters. This is the area that's traveling through the air. 14 meters per second is the terminal velocity of the squirrel. Now for a person with no drag, we'll say that the final speed squared equals initial speed squared plus 2 times acceleration times the distance of the traveling, and then we can say that the initial speed is zero because the person is falling out of the tree, and then take the square root of both sides. We get the final speed is square root 2 times acceleration times the distance. It's square root of 2 times 9.8 meters per second squared times 5 meters and taking the downward direction to be positive in order to not have to deal with negative signs here. That works out to 9.9 meters per second. With no drag, the squirrel would reach this speed. This means that the squirrel won't actually reach their terminal velocity because the terminal velocity with drag in consideration is 14 meters per second. They'll hit the ground at this speed before reaching this speed here.