Skip to main content
Change the chapter
Question
An RC circuit consists of a $40.0 \textrm{ }\Omega$ resistor and a $5.00 \textrm{ }\mu \textrm{F}$ capacitor. (a) Find its impedance at 60.0 Hz and 10.0 kHz. (b) Compare these values of $Z$ with those found in Example 23.12, in which there was also an inductor.
Question by OpenStax is licensed under CC BY 4.0.
Final Answer
Solution Video 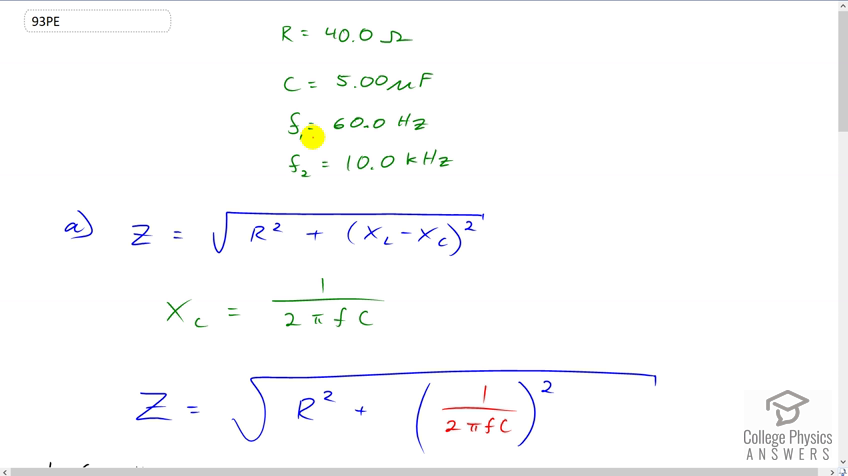 This is College Physics Answers with Shaun Dychko. We're going to find the impedance of an <i>R</i> <i>C</i> circuit that has a resistance of 40 ohms and a capacitance of 5 microfarads at two different frequencies, <i>F1</i> being 60 hertz and <i>F2</i> being 10 kilohertz. So, impedance is the square root of the resistance squared plus the difference between the inductive reactance and the capacitive reactance squared. Now, there's no inductance so we just have capacitive reactance is 1 over 2 Pi times frequency times capacitance and we substitute that in for <i>Xc</i>. And, we can ignore this negative sign because that's going to disappear when we square it anyway. So, we have this formula for impedance for an <i>R</i> <i>C</i> circuit. So, the impedance in case one where we have 60 hertz is going to be square root of 40 ohms squared plus 1 over 2 Pi times 60 hertz times 5 times 10 to the minus 6 farads, all squared. And, this gives an impedance of 532 ohms. And then, at 10 kilohertz, we're going to have a reduced impedance, we expect, because at higher frequencies, capacitors have a smaller reactance since as <i>F</i> increases, this reactance decreases. Okay. So, at 10 kilohertz, we have impedance 2 is square root of 40 squared plus 1 over 2 Pi times 10 times 10 to the 3 hertz times 5 times 10 to the minus 6 farads, all squared, giving an impedance of 40.1 ohms. Now, in the example, we're meant to compare it to 23.12, there's a 3 millihenry inductor added to the same circuit. And, at 60 hertz, the impedance we found was 531 ohms, which is approximately the same as the impedance that we found in this question with just an <i>R</i> <i>C</i> circuit. And, the reason that's pretty much the same is that at low frequencies, the inductive reactance is very small because inductive reactance is 2 times Pi times frequency times inductance and so with a small <i>F</i>, we have a small reactance. And so, this <i>Xl</i> term didn't matter, it didn't do anything because this is a very small number and so essentially, this difference is just <i>Xc</i> for small frequencies. And, whereas, at 10 kilohertz, the impedance we found in that example was 190 ohms. And so, the impedance that we found here with no inductor was 40.1 ohms. We'll divide that by the 190 ohms that we found and we see that without the inductor, the impedance is only 0.21, or 21 percent of what it was. So, at low frequency, the inductor doesn't matter, and so I talked about that a little bit already. Essentially, since <i>X L</i> is zero with small frequency, this impedance just becomes square root of <i>R squared</i> plus the capacitive reactance squared. Whereas at high frequency, the capacitor becomes irrelevant because the capacitive reactance is 1 over 2 Pi times frequency times capacitance and as <i>F</i> increases, capacitive reactance decreases in which case the impedance essentially becomes square root of <i>R squared</i> plus the inductive reactance squared. And so, at high frequency, the inductor is significant and so we see that we have a large difference in our impedance between this question without the inductor versus the example that does have the inductor.