Skip to main content
Change the chapter
Question
Integrated Concepts A large rocket has a mass of $2.00 \times 10^6 \textrm{ kg}$ at takeoff, and its engines produce a thrust of $3.50 \times 10^7 \textrm{ N}$. (a) Find its initial acceleration if it takes off vertically. (b) How long does it take to reach a velocity of 120 km/h straight up, assuming constant mass and thrust? (c) In reality, the mass of a rocket decreases significantly as its fuel is consumed. Describe qualitatively how this affects the acceleration and time for this motion.
Question by OpenStax is licensed under CC BY 4.0.
Final Answer 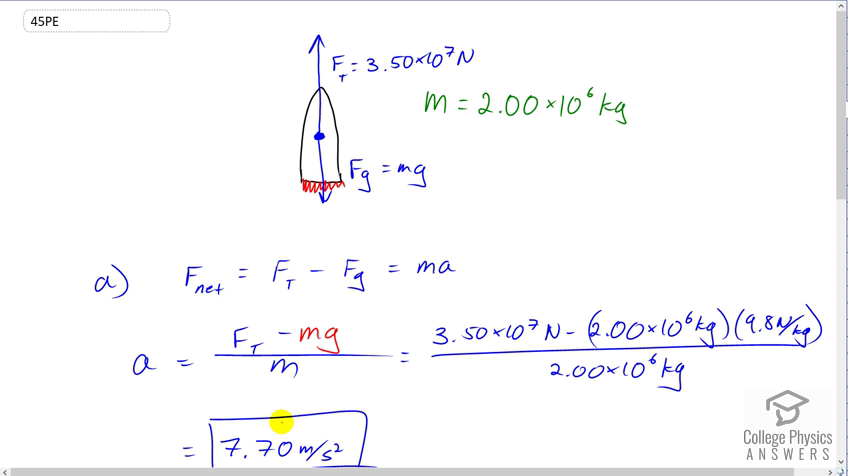 This is College Physics Answers with Shaun Dychko. We're given the mass and the thrust of this rocket and we're asked to find out what its acceleration is and how long it will take to reach 120 kilometers an hour. So the mass is two times ten to the six kilograms and for our calculations we assume that this mass stays constant although in reality, the fuel consumed means that the mass is decreasing by the amount by which the fuel is being used up. I mean a lot of the fuel is getting turned into a gaseous state and ejected out the end of the rocket and this is the reason why there is thrust -- is because all this mass is being pushed out really quickly out one end and by way of conservation of momentum, that's what causes the rocket to go forwards. I mean the rocket is -- or you can think of it as Newtons third law phenomenon where the rocket is putting a force on the gas that's coming out and then the gas is in turn putting the same magnitude force on the rocket in the opposite direction. Okay. So, the thrust is 3.5 times ten to the seven Newtons. We have a free body diagram with thrust going upwards and the force of gravity going down and the net force will be the up forces minus the down forces, so the thrust upwards minus gravity down and that net force always is going to be mass times acceleration. So we'll divide both sides by mass here, and then switch the sides around to solve for a. That is <i>F t</i> minus <i>mg</i> over <i>m</i> where I substituted for force of gravity as <i>mg</i> here, and then plug in numbers. We have 3.5 times ten to the seven Newtons of thrust, minus 2 times ten to the six kilograms, times 9.8 Newtons per kilogram, all divided by 2 times ten to the six kilograms, giving 7.70 meters per second squared acceleration. Now, to figure out the times it takes to reach 120 kilometers per hour, we'll use this kinematics formula where the final velocity is the initial velocity plus acceleration times time. Now, we're going to convert 120 kilometers per hour into meters per second by multiplying by 1 hour for every 3600 seconds, and then multiplying by 1000 meters for every kilometer. These conversion factors cause the units that we don't want to disappear and cancel leaving us behind units that we do want, meters per second. This is the same as dividing by 3.6 by the way. So we have 33.333 meters per second as our final speed. The initial speed is zero, so this term disappears in this formula and now we divide both sides by <i>a</i>, and switch the sides around and we solve for <i>t</i>. So <i>t</i> is final velocity divided by acceleration, 33.333 meters per second divided by 7.7 meters per second squared, giving 4.33 seconds is the time to reach the final velocity. Now, in reality, the mass of the rocket is decreasing as it's using up its fuel and so given that acceleration equals some stuff divided by mass, that means that as the denominator decreases, this quotient is increasing. So as the denominator gets smaller, the acceleration is getting bigger. That makes sense because with the force being constant, the thrust, one would expect a less mass of object to accelerate faster than a more mass of object. So in reality it will take less time to reach 120 kilometers per hour than we have calculated here.