Skip to main content
Change the chapter
Question
A freight train consists of two $8.00 \times 10^4 \textrm{ kg}$ engines and 45 cars with average masses of $5.50 \times 10^4 \textrm{ kg}$. (a) What force must each engine exert backward on the track to accelerate the train at a rate of $5.00 \times 10^{-2} \textrm{ m/s}^2$ if the force of friction is $7.50 \times 10^5 \textrm{ N}$, assuming the engines exert identical forces? This is not a large frictional force for such a massive system. Rolling friction for trains is small, and consequently trains are very energy-efficient transportation systems. (b) What is the force in the coupling between the 37th and 38th cars (this is the force each exerts on the other), assuming all cars have the same mass and that friction is evenly distributed among all of the cars and engines?
Question by OpenStax is licensed under CC BY 4.0.
Final Answer 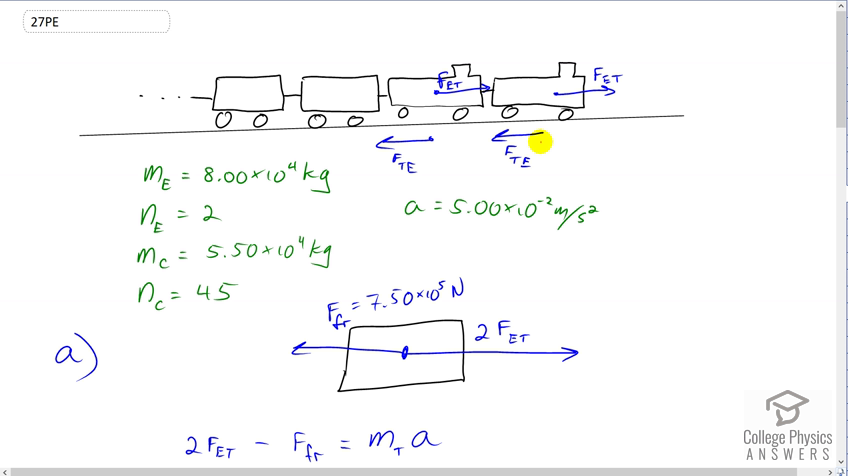 Part a answer should have been N not Kg

Thank you for the comment @manju! I've updated the units.

In reply to Part a answer should have… by manju

You guys are missing a lot of other questions from the book.

I am sure my frustration is mostly based in my lack of proficiency, but you move very fast in these complex problems.

Thank you for the feedback aspruce. Apologies if this went too fast. Feedback like this helps me adjust the videos I'm still making (currently on the even numbered problems for chapter 7). For videos already recorded, is it helpful to adjust the playback speed? Or is the issue that I'm skipping some steps or concepts you would like to have seen?
All the best,
Shaun

In reply to I am sure my frustration is… by aspruce