Skip to main content
Change the chapter
Question
The force per meter between the two wires of a jumper cable being used to start a stalled car is 0.225 N/m. (a) What is the current in the wires, given they are separated by 2.00 cm? (b) Is the force attractive or repulsive?
Question by OpenStax is licensed under CC BY 4.0.
Final Answer
Solution Video 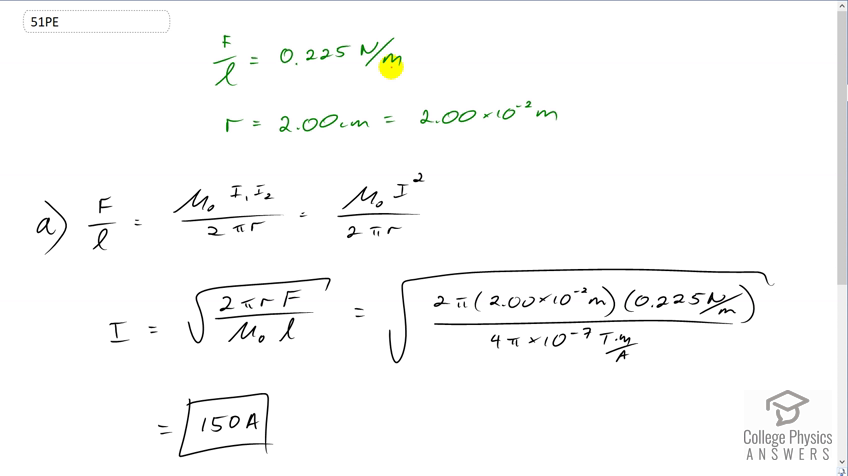 This is College Physics Answers with Shaun Dychko. The two adjacent wires of a jumper cable is exerting a force on each other of 0.225 Newtons per meter and they are separated by two centimeters which is two times ten to the minus two meters. And so the force per length between two wires, two parallel long wires, is the permeability of free space times the current of the first wire times the current of the second wire, divided by two <i>pi</i> times the distance between the wires. Now the currents are going to be the same in each wire, and so we can write <i>I</i> squared and no subscripts on the <i>I</i>. We’ll solve for <i>I</i> by multiplying both sides by two <i>pi r</i> over <i>mu naught</i>, and then take the square root of both sides. So that’s square root of two <i>pi</i> times <i>r</i> times <i>F</i> over <i>mu naught l</i>, and that is square root of two <i>pi</i> times two times ten to the minus two meters, distance between the wires, times 0.225 Newtons per meter which substitutes for both the <i>F</i> and the <i>l</i> there, and divided by <i>mu naught</i> which is four <i>pi</i> times ten to the minus seven Tesla meters per Amp. And this works out to 150 Amps. Now since, by the way the currents have to be the same magnitude in these wires because they are part of the same circuit, they are connected to some battery here, so the current comes out from the large plate and goes into the small plate of the battery and then it’s connected to some motor, like maybe the starter of the engine there, or maybe it’s connected to the, well eventually it’s connected to the starter but it’s actually connected to the dead battery of the other car that’s being helped. And always connecting positive to positive and negative to negative by the way. So the currents are going like this, this is the good battery and that is the bad battery. And the currents, these two wires are in the same circuit so they have to have the same current. The force between them is repulsive because imagine you consider the magnetic field created by this right hand wire, let’s grab it with our right hand and our thumb would be pointing upwards, and at the position of this wire here, magnetic field lines would be coming out of the page. And so we can draw dots for the magnetic field lines here, this is magnetic field created by the right hand strand in the presence of the left hand strand. And then we’ll apply the right hand rule to the left hand wire and we’ll say point the thumb in the direction of the current which is down, point the fingers in the direction of the magnetic field lines which is pointing out of the page, and the palm is facing to the left, so the force is this way to the left. And you could do the same analysis in the opposite in a sense by finding the magnetic field around the right hand wire due to the left hand one, and then figure out the force in the right hand wire, and you’ll discover that it’s to the right. So it’s a repulsive force when the currents are going in opposite directions in the wires.