Skip to main content
Advanced search
Question
A prankster applies 450 V to an $80.0 \textrm{ }\mu\textrm{F}$ capacitor and then tosses it to an unsuspecting victim. The victim’s finger is burned by the discharge of the capacitor through 0.200 g of flesh. What is the temperature increase of the flesh? Is it reasonable to assume no phase change?
Question by OpenStax is licensed under CC BY 4.0.
Final Answer 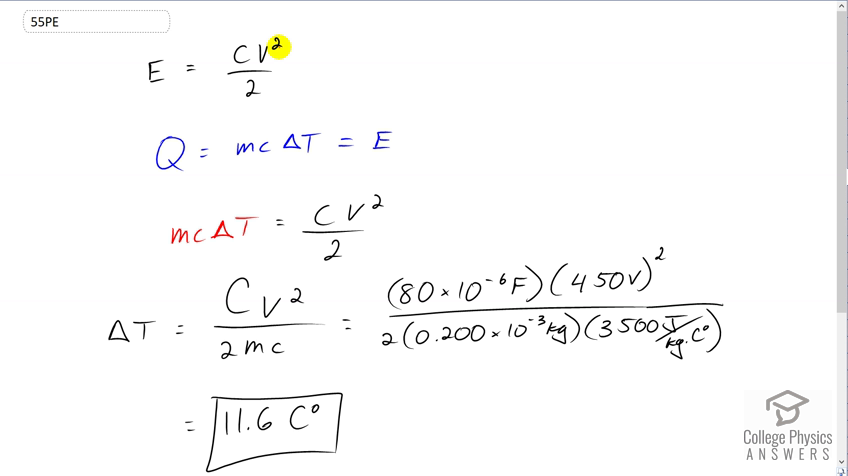 Video Transcript
This is College Physics Answers with Shaun Dychko. The first question we're going to answer is how much energy is stored in this capacitance. We can find that by taking the capacitance, multiplying by the square of the voltage divided by two. And then, we'll look at the energy absorbed by the skin tissue of the poor victim, and that's going to be, well we use the letter Q for some reason when we're talking about heat transfer. That's going to be the mass of skin multiplied by the specific heat capacity of the skin times by the change in temperature of it. And, we're going to figure out what the change in temperature is going to be. And, this energy absorbed by heat is coming from the capacitor, energy stored in the capacitor. So, we can equate these two things here. We equate this with this. So, we see M C Delta T is going to be capacitance times voltage squared divided by two. And you'll have to bear with me a little bit, I'm using the letter C here twice, but we mean two different things. This is meant to be a capital C for capacitance, and this is a lowercase C for specific heat capacity. So, we're going to solve for Delta T to see what the change in temperature is and see if there's a phase change. And, we'll be dividing both sides by M C. And so, we get the change in temperature, this capacitance times voltage squared divided by two times mass times specific heat capacity. So, that's 80 microfarads, which is 80 times ten to the minus six farads, times 450 volts squared divided by two times 0.2 grams, which is 0.2 times ten to the minus three kilograms of skin, multiplied by 3500 Joules per kilograms Celsius degree, specific heat capacity of skin. And, this makes a temperature change of 11.6 Celsius degrees. And so, we can assume that the skin at the most would start at 37 degrees Celsius, and so adding 11.6 makes 48.6, in which case, there's not going to be any phase change, because phase change wouldn't occur until boiling at 100 degrees Celsius. And so, it's reasonable to assume no phase change. So, the victim is going to be essentially unharmed. They will just be probably really scared by the shock, but they'll be okay.