Skip to main content
Advanced search
Question
The momentum of light is exactly reversed when reflected straight back from a mirror, assuming negligible recoil of the mirror. Thus the change in momentum is twice the photon momentum. Suppose light of intensity $1.00 \textrm{ kW/m}^2$ reflects from a mirror of area $2.00 \textrm{ m}^2$ . (a) Calculate the energy reflected in 1.00 s. (b) What is the momentum imparted to the mirror? (c) Using the most general form of Newton’s second law, what is the force on the mirror? (d) Does the assumption of no mirror recoil seem reasonable?
Question by OpenStax is licensed under CC BY 4.0.
Final Answer
Solution Video 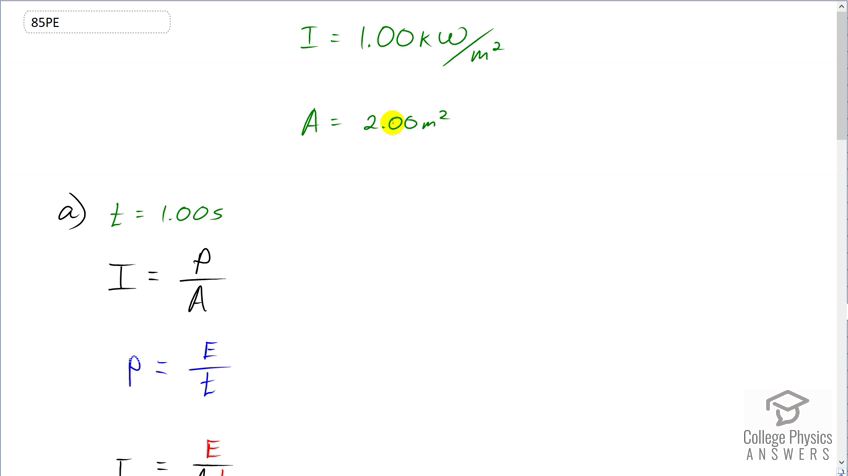 Video Transcript
This is College Physics Answers with Shaun Dychko. Photons with an intensity of 1 kilowatt per square meter are hitting a mirror of area 2 square meters. And question (a) says, in 1 second, how much energy is reflected by the mirror? Now, intensity is power per area. And so if we can substitute for power, in terms of energy, we can solve for energy. So we are gonna write down that power is energy per time and then solve this, or substitute this, for power here and then that's what I have shown in red here; energy divided by time is written in place of p. And so intensity is energy divided by area times time and then we can solve this for energy by multiplying both sides by At. So energy is intensity times area times time. So that's 1 times 10 to the 3 watts per square meter times 2 square meters times 1 second which is 2.00 times 10 to the 3 joules. Part (b) says what is the change in momentum of the mirror? So the mirror is reflecting the photons straight back we are told and the photons have an incident momentum, p, and then when they bounce back, they have the same momentum because we assume the mirror has negligible recoil; same momentum, in the other direction, p prime, say. And so the change in momentum here is 2 times the incident momentum. And so the momentum of a photon is energy divided by speed of light and so we substitute that in place of p and so we have 2 times energy over speed of light. So that's 2 times 2000 joules, that we calculated in part (a), and divide it by speed of light, which is 1.33 times 10 to the minus 5 kilograms meters per second, change in momentum of the mirror. Since the mirror is gonna have the same change in momentum as the photons, just in the opposite direction, and we are just concerned with magnitude here, not direction. OK. Part (c) says, what is the force? Well, it's gonna be the change in momentum divided by time. This was the original way that Newton formulated his second law, was in terms of momentum. He didn't say ma instead Newton said, change in momentum divided by time, which if you substitute mass times velocity in place of p, you can see that this is mass times velocity over time and velocity over time is acceleration so this is the same as saying ma. But anyway, this is what he said; change in momentum over time. And this is a better way to formulate it for our purposes in this question because we know the change in momentum— 1.33422 times 10 to the minus 5 kilograms meters per second and the time we are dividing by is the time during which this change of momentum occurs, which is the time it took to have this much energy reflected which, we are told in part (a), is 1 second. So we have change in momentum divided by 1 second, which is 1.33 times 10 to the minus 5 newtons; that's a very small force. And so yes, the assumption of no mirror recoil is reasonable.

Solutions for problems in chapter 29