Skip to main content
Change the chapter
Question
(a) Ear trumpets were never very common, but they did aid people with hearing losses by gathering sound over a large area and concentrating it on the smaller area of the eardrum. What decibel increase does an ear trumpet produce if its sound gathering area is $900 \textrm{ cm}^2$ and the area of the eardrum is $0.500 \textrm{ cm}^2$, but the trumpet only has an efficiency of 5.00% in transmitting the sound to the eardrum? (b) Comment on the usefulness of the decibel increase found in part (a).
Question by OpenStax is licensed under CC BY 4.0.
Final Answer
Solution Video 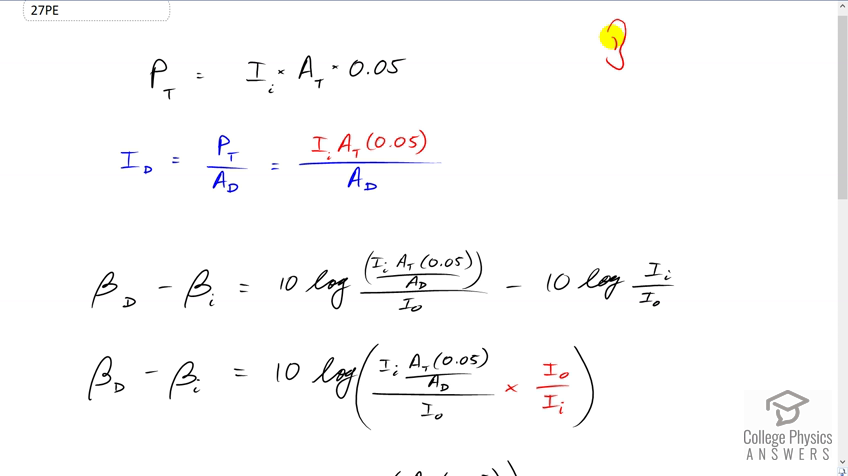 This is College Physics Answers with Shaun Dychko. We are going to consider an ear trumpet in this question and so this is an ear then this, your trumpet is maybe a plastic cone which has some cross sectional area that is large and so its gathering all the sounds over this entire area, we will call this <i>A subscript t</i> for trumpet and funnelling that sound to the ear drum which is here, which has an area of <i>A subscript d</i> for drum and now this transmission of the sound is only five percent efficient but it’s still never less than since this area trumpet is so big, it is helpful as we’ll see. Now, the power that is delivered by the trumpet. Well, first of all lets just say that intensity is power divided by area and so this is watt per square meter and the power delivered by the trumpet is going to be the initial intensity of the sound multiplied by the area of the trumpet and then multiplied by 0.05 since its only fiver percent efficient and so I got this expression by re-arranging this to solve for <i>P</i> by multiplying both sides by <i>A</i> and the intensity at the ear drum then is going to be the power delivered to it which is going to be the power delivered by the trumpet that we just found divided by the area of the ear drum and so that’s going to be the initial intensity times the area of the trumpet times 0.05 divided by area of the ear drum. Now, we want to know what is the difference between sound levels that will occur as a result of this ear trumpet and well, we expect a positive number because this ear trumpet should be helping and so we will make expression for each sound level here. We have ten times logarithm of the intensity at the ear drum with the trumpet and so that’s a substitution of this expression in place of intensity here and divide by reference intensity minus the sound level that would occur with no ear trumpet. So, ten logarithm of the initial intensity divided by <i>I naught</i> and now when you are taking difference of two logarithm, well, first of all we are gonna factor out ten and then you can take each argument and divide first by the second and take logarithm of that result. So, the logarithm of <i>A</i> minus <i>B</i> is, lets say it into, logarithm of <i>A</i> minus logarithm of <i>B</i> equals logarithm <i>A</i> divided by <i>B</i>. So, we have ten multiplied by all of this and this is like <i>A</i> and this is like <i>B</i> and so we are going to divide the first argument and by argument we mean the thing we are taking logarithm of this whole fraction. We are going to divide the first argument by the second. Since, dividing a fraction by fraction gets messy, I am going to instead multiply by the reciprocal of the second expression, so that’s why I have written multiply by <i>I naught</i> over <i>I i</i> and the original intensity is cancelled and so too the reference intensities and we have the difference in sound level then, with the ear trumpet versus without the ear trumpet is going to be ten logarithm of area of the the trumpet by times 0.05 divided by area of the ear drum and so we have ten times logarithm of 900 squared centimeters, area of the trumpet, times 0.05 divided by 0.500 squared centimeters of ear drum and this is 19 and a half increase in the sound level as a result of the ear trumpet and yes, this is a significant increase if you look at a table in the text book, it shows, you know, the difference in sound level for different noises and its equivalent to raising the sound intensity level of a normal conversation to a loud radio, so, that is significant.