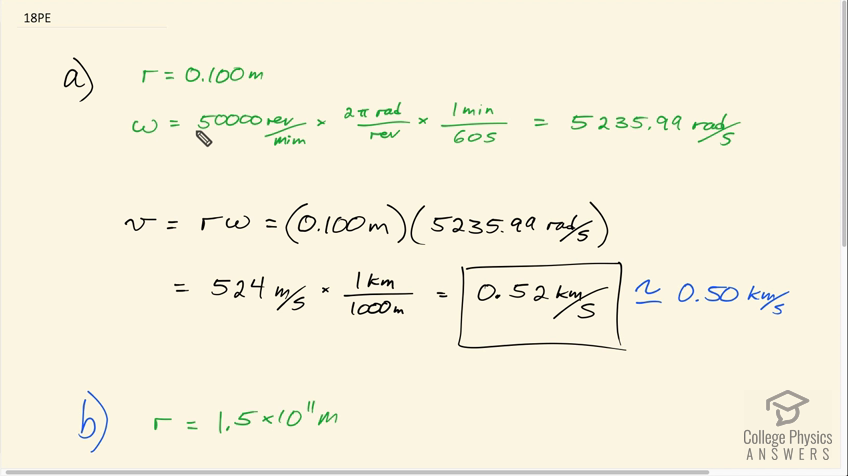 This is College Physics Answers with Shaun Dychko. We're going to calculate the linear speed on a point at the edge of an ultracentrifuge, which has a really fast angular speed of 50,000 rpm, revolutions per minute in other words, and we'll compare that linear speed with the linear speed of the earth orbiting around the sun. An ultracentrifuge, it's a circular device and often in laboratories that have test tubes containing solutions where they want to separate the maybe some suspended material inside the test tube or put it in this ultracentrifuge, and then it'll make all the solid stuff collect in the outer edge here, every test tubes. Suppose these test tubes are drawn backwards. I guess the mouth would be on this side, and the bottom would be on this side. Ultracentrifuge, its radius is 0.100 meters, that's 10 centimeters and has an angular speed of 50,000 rpm, which is 5,235.99 radians per second. We need to have these radiant per second units for our formulas. I got it by multiplying by 2 pi radians for every revolution, which makes the revolution units cancel, then multiplying by 1 minute for every 60 seconds, leaving us with radians per second. The linear speed then is the radius to that point on the edge <i>r</i> and multiply by the angular velocity. That's 0.1 meters times this angular velocity, giving us 524 meters per second. We want to have this in units of kilometers per second because we're told to compare it to 0.50 kilometers per second and verify that this point on the edge of the ultracentrifuge does go with this speed. The meters cancel leaving us with 0.52 kilometers per second, which is close enough to the textbook value of 0.50. Now for the earth, we're going to find its linear speed, it's tangential velocity, in other words, as it goes around the sun. As the earth is here orbiting, what is this velocity? We have the radius times the angular velocity, so that's 1.5 times 10 to the 11 meters is the distance from the sun approximately, and then we multiply that by the radians per second. We know there are 2 pi radians for every year. That is to say that there's one full circle which has 2 pi radians every year. Then we multiply by a whole bunch of factors during the year units into seconds. One year for every 365 and a quarter days by 1 day for every 24 hours, and then 1 hour for every 3600 seconds. This works out to 30 kilometers per second.