Skip to main content
Advanced search
Question
Integrated Concepts When kicking a football, the kicker rotates his leg about the hip joint. (a) If the velocity of the tip of the kicker's shoe is 35.0 m/s and the hip joint is 1.05 m from the tip of the shoe, what is the shoe tip's angular velocity? (b) The shoe is in contact with the initially stationary 0.500 kg football for 20.0 ms. What average force is exerted on the football to give it a velocity of 20.0 m/s? (c) Find the maximum range of the football, neglecting air resistance.
Question by OpenStax is licensed under CC BY 4.0.
Final Answer
Solution Video 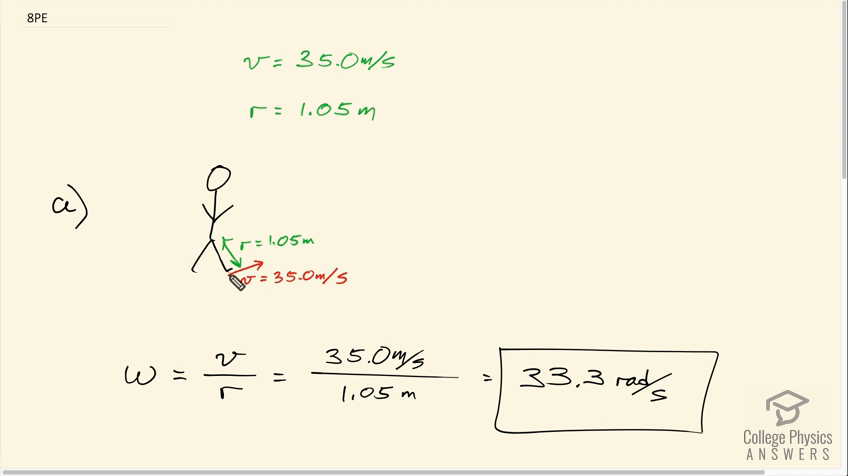 Video Transcript
This is College Physics Answers with Shaun Dychko. We're told that a person's foot is traveling at 35.0 meters per second, and they kick a ball. The question is, what is the angular velocity of their foot? Well, we need to take that angular or that tangential velocity, which we're given, and divide that by the distance from the pivot point, which is their hip. We're told that their leg is 1.05 meters long. That means the angular velocity, then it's going to be this tangential velocity that were given of their foot divided by the leg length, that's 35.0 meters per second divided by 1.05 meters, which is 33.3 radians per second. In Part B, we're told how long the foot spends in contact with the football. We're given the football's mass, and we have to figure out the force applied to it. Force is change in momentum divided by time. It's also mass times acceleration. These both work out to the same. This is Newton's original way of stating his second law, which is to say, change in momentum over time. But either way, you get the same answer. You could have written this, ma and then it'd be mass times change in velocity over time. That's essentially what we have here, mass, if you factor it out, it'd be multiplied by change in velocity divided by time. The initial velocity is zero, and so we just say mv final divided by time. That's point five kilograms mass of the football times 20 meters per second, its final velocity, divided by 20 milliseconds, hich we have to rate as times 10 to the minus 3 seconds, and we get 500 newtons. The next question is, what is the maximum possible range of the football? Range refers to what horizontal distance could it possibly cover? The football starts here and then it's kicked by the person and it'll travel in an arc and it'll get, say, here. The question is, what is this distance, the maximum possible distance? That's our max, this is the range maximum. Now in chapter 3 equation 71, we're given a formula for the range. It's the initial velocity squared divided by acceleration due to gravity, multiplied by sine of 2 times the launch angle. That's the angle with respect to horizontal. We want to know what the maximum ranges though so we don't need to concern ourselves with this angle here. We want to know what maximum value could this possibly be. Now the sine function starts at zero for zero degrees, and it goes up to a maximum of one at 90 degrees, and then it goes back down to zero at 180, and then negative one at 270, and then back to zero again at 360. The important thing to notice is that the maximum possible value for the sine function is 1. We can work out that theta should be 45 degrees to get the maximum range. But that's beside the point, the point is that the maximum that this whole thing could possibly be is 1. We can replace it with a number 1. The maximum range then is the initial velocity squared divided by g. That's 20 meters per second squared divided by 9.8 meters per second squared, and that is 40.8 meters is the maximum possible range, assuming there's no air friction.