Skip to main content
Change the chapter
Question
What would be the final temperature of the pan and water in Calculating the Final Temperature When Heat Is Transferred Between Two Bodies: Pouring Cold Water in a Hot Pan (Example 14.3) if 0.260 kg of water was placed in the pan and 0.0100 kg of the water evaporated immediately, leaving the remainder to come to a common temperature with the pan?
Question by OpenStax is licensed under CC BY 4.0.
Final Answer 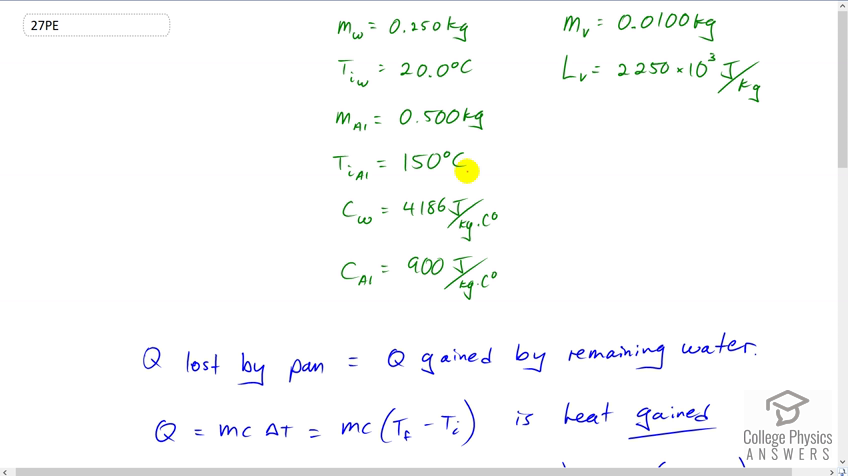 This is College Physics Answers with Shaun Dychko .26 kilograms of water is added to an aluminum pan with a temperature of a hundred fifty degrees Celsius, and the water initially has a temperature of 20 degrees Celsius, and .01 kilograms of that water immediately evaporates and takes away some heat of vaporization with it, leaving .35 kilograms of water left behind in the pan to change its temperature. And, we have the specific heats of water and aluminum written down here. And so, the pan is placed on an insulated pad so that there’s no heat transfer between the pan and anything else except the water. So that means all the heat lost by the pan is going to be gained by the remaining water. Now, when you’re talking about heat ‘gained’ by something, that’s what this formula tells you. And when you see a <i>Delta</i> it’s always final minus initial. So we have, the heat gained by something is its mass, times its specific heat, times its final temperature minus initial temperature. But here we have a heat lost term. So heat lost is negative <i>Q</i>, and so that’s negative <i>mc</i>, times <i>Tf</i> minus <i>Ti</i>, which we can write without a negative sign in front by writing <i>mc</i>, times <i>T initial</i> minus <i>T final</i>. So by switching the order of these temperature terms around, we can write this as positive. So, that’s what I’ve done down here for the heat lost term (heat lost by the aluminum pan), I’ve written initial minus final. Whereas for the water, it’s gained heat so I’ve written final minus initial. Okay, so, the heat gained by the water is the heat lost by the aluminum, and then also lost through the heat of vaporization due to the .01 kilograms of water immediately evaporating. So we substitute through to these <i>Q</i>’s. And so we have, mass of the water remaining, times specific heat of water, times the final temperature minus the initial temperature of the water, equals the mass of the aluminum, times the specific heat of aluminum, times its change in temperature, initial minus final, and then subtract from that the heat of vaporization, which is the mass that vaporizes times the latent heat of vaporization for water. We’re trying to solve for <i>Tf</i> here, and so we have to multiply through. We have to distribute this factor into the brackets for both of these terms here. And so we end up with five terms to consider. And we’re gonna solve this for <i>T final</i>. So, this line came about by multiplying this into the brackets. And then this into the brackets as well. And then the next step, a bunch of things happen once here. This is a term containing the factor <i>T final</i>, and so we need to collect it on one side along with this term containing <i>T final</i>. And then, we add it to both sides. And then this term has to be added to both sides in order to get it away so that we’re isolating <i>Tf</i> by itself on the left. And then, I factored <i>Tf</i> out of this term, and this one. And then divided both sides by that bracket that resulted. So, I kinda did a few things all at once there. Hopefully, this is making enough sense. So, on the numerator here, we have this thing written here, and then minus this, and then plus this here, and then we’re dividing by the bracket that would result by factoring <i>Tf</i> out from this term, and this one, which will be positive once it’s collected on the same side as this term. And so that’s why it’s <i>mw</i>, <i>Cw</i>, plus <i>mAl</i>, <i>CAl</i>. Okay, and then we plug in numbers and get our final temperature. So that’s .5 kilograms of aluminum in the pan, times the specific heat of aluminum, times its 150 degrees Celsius initial temperature, and then, add to that .25 kilograms, times 4186 Joules per kilogram per Celsius degree, times 20 degrees Celsius initial temperature for the water, then subtract away the heat of vaporization removed by the .1, .01 kilograms of water that evaporates immediately, and then divide that by the water mass times specific heat of water, plus the aluminum mass times specific heat of aluminum. And this works out to 44.0 degrees Celsius. And that’ll be the final temperature of the pan-water combination.