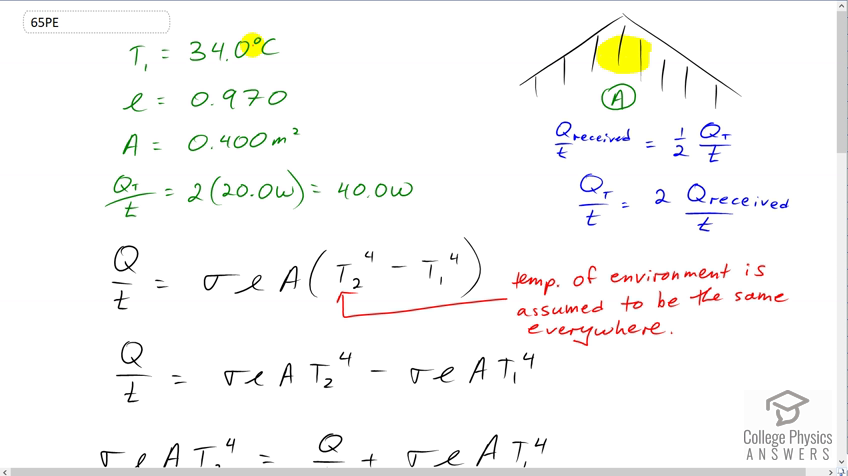 Video Transcript
This is College Physics Answers with Shaun Dychko. A shirtless circus rider is underneath a tent – a circus tent – and the temperature of their skin is 34 degrees Celsius, and the skin has an emissivity of .97, and an area of .4 square meters exposed to the tent surface that we’re concerned with that has the sun shining on it. Now, so there’s this spot that’s being illuminated by the sun, and it’s hot, and it’s emitting some radiation – thermal radiation – to the skin of the rider, which has some area. And we’re told that the rate of radiative heat transfer to the skin, that’s received by the skin is half of what would happen if the entire area of this tent was illuminated by the sun. And so, that’s important information because this formula that we have for calculating the rate of heat transfer due to radiation assumes that this temperature of the surroundings is the same everywhere. And so, we can use this formula only if we have an assumption that an entire area is all the same temperature because there’s radiation hitting this exposed skin area from all directions, and this formula assumes that every spot the radiation’s coming from is all the same temperature. And so, we need information about what would happen if it was all the same temperature. So, and we’re told that it would be, well, what’s received is half of what would happen if the whole thing was the same temperature and so we can solve for this. Because that’s what we’d plug into our formula, and it’s going to be two times what’s received. Okay. And so, the energy that we’re going to plug into our formula is two times 20 watts, which is 40 watts. So, the total rate of heat transfer then is: Stefan-Boltzmann’s constant, times emissivity, times area, times the assumed constant temperature over the entire surroundings to the power of 4, minus the temperature of the person’s skin to the power of 4. And so we have to solve for T2. This is the question. And so we distribute the sigma, epsilon, A, into the brackets. And we’re left with this: rate of heat transfer is sigma, epsilon, A, T2 to the power of 4 minus sigma, epsilon, A, T1 to the power of 4. Maybe I shouldn’t call it an epsilon; an epsilon’s actually like this. Let’s just call it a scripted e I guess. This whole thing can be moved to the other side by adding it to both sides, and then we’ll switch the sides around so that the unknown, T2, is on the left. So we have: sigma, e, A, T2 to the power of 4 equals the rate of heat transfer, plus sigma, e, A, T1 to the power of 4. And then we divide both sides by sigma, e, A. And so T2 to the power of 4 is all this, and we raise both sides to the same exponent, one quarter, so that on the left side, T2 to the power of 4 to the one quarter is T2 to the power of 1. So T2 in other words. And that equals all this to the power of 1 quarter. And so we have: 40 watts, divided by Stefan-Boltzmann’s constant, times emissivity of .97, times the area of .4 square meters, plus 34 degrees Celsius converted into Kelvin by adding 273.15 to the power of 4, and that sum gets raised to the power of 1 quarter. And that works out to this temperature in Kelvin, and we take away 273.15 from it to get our answer in Celsius. So we have 48.6 degrees Celsius, must be temperature of the spot on the tent canvass. So, part B says, “what would happen if the tent canvass was white?” And in that case, the emissivity is going to go down, and the rider is also covered in white. And so with a lower emissivity, the tent would absorb less radiation from the sun and become less hot, and because it’s less hot, T2 will be decreased, and with a decreased T2, there’ll be less radiation going into the rider who furthermore will absorb less of this reduced radiation because of the rider being white and having a decreased emissivity. And so, there’s a compounding effect of two different effects both making the rider less hot