Skip to main content
Advanced search
Question
Heat transfers from your lungs and breathing passages by evaporating water. (a) Calculate the maximum number of grams of water that can be evaporated when you inhale 1.50 L of $37^\circ\textrm{C}$ air with an original relative humidity of 40.0%. (Assume that body temperature is also $37^\circ\textrm{C}$ .) (b) How many joules of energy are required to evaporate this amount? (c) What is the rate of heat transfer in watts from this method, if you breathe at a normal resting rate of 10.0 breaths per minute?
Question by OpenStax is licensed under CC BY 4.0.
Final Answer
Solution Video 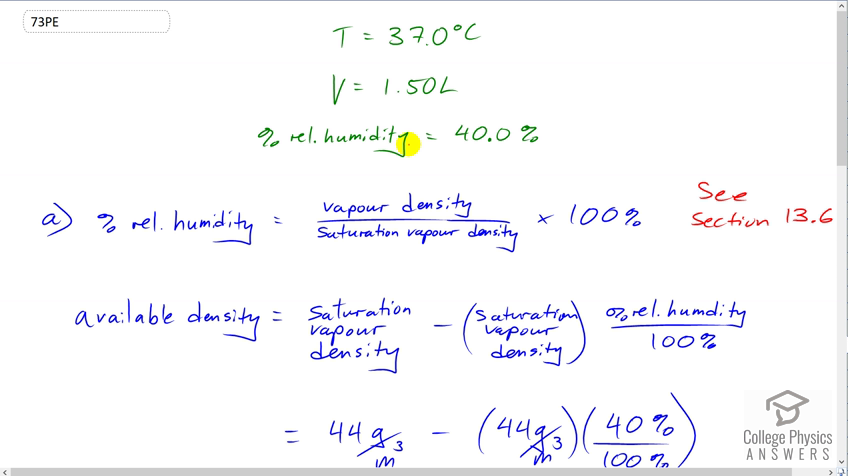 Video Transcript
This is College Physics Answers with Shaun Dychko. A person is inhaling one and a half liters of air which has a temperature of 37 degrees Celsius and a relative humidity of 40 percent. And, you have to go back to section 13.6 if you want to review what relative humidity means and it is the vapor density of the water, in this case, divided by its saturation vapor density. And so, this is the maximum vapor density that can occur for water at 37 degrees Celsius. And so, we want to know what is the available density, how much water can still evaporate given that we're 40 percent to capacity, what capacity is remaining to contain some more water vapor that is going to be evaporated from inside the lungs. And, so that'll be, you know, 60 percent times the saturation vapor density. But I have written it out maybe in a more rigorous way. So, we have the available density is going to be the maximum possible saturation vapor density minus the amount of density already taken up, which is 40 percent divided by 100 percent or 0.4 times this 44 grams per cubic meter. I had to look up this number, 44 grams per cubic meter, in section 13.6. That's the saturation vapor density for water at 37 degrees Celsius. And so, we have 26.4 grams per cubic meter of space, so to speak, available for evaporation. And so, let's figure out how much mass of water can fill that. And so, density of water is mass divided by volume and we can solve for mass by multiplying both sides by V. And, we have M is density times volume. And so, the density that is available is 26.4 grams per cubic meter, and then we're multiplying by one and a half liters of air. And, that needs to be converted into cubic meters by multiplying by one cubic meter for every 1000 liters. And, we're left with this many grams which is 39.6 milligrams. So, this is the mass of water that can still evaporate into this air that's been inhaled, one and a half liters of air. And, the amount of heat that would be transferred away from the body by having some mass evaporate will be this much mass, 0.0396 grams converted into kilograms times by the latent heat of vaporization for water at 37 degrees Celsius. So, this number is not the number you'll find in your data table for latent heat of vaporization because that data table is created for water that is boiling. But, this water is at 37 degree Celsius body temperature and latent heat of vaporization is higher at these lower temperatures. So, this works out to 96.2 Joules of energy. Now, assuming that there are ten breaths per minute or in other words 60 seconds per ten breaths, we can figure out the rate of energy transfer due to this heat loss due to evaporation. So, there's 96.2 Joules of energy lost per breath and then we divide that by 60 seconds per breath and the breath units cancel, leaving us with Joules per second, and this works out to 16.0 watts.