Skip to main content
Change the chapter
Question
(a) What is the pressure drop due to the Bernoulli effect as water goes into a 3.00-cm-diameter nozzle from a 9.00-cm-diameter fire hose while carrying a flow of 40.0 L/s? (b) To what maximum height above the nozzle can this water rise? (The actual height will be significantly smaller due to air resistance.)
Question by OpenStax is licensed under CC BY 4.0.
Final Answer
Solution Video 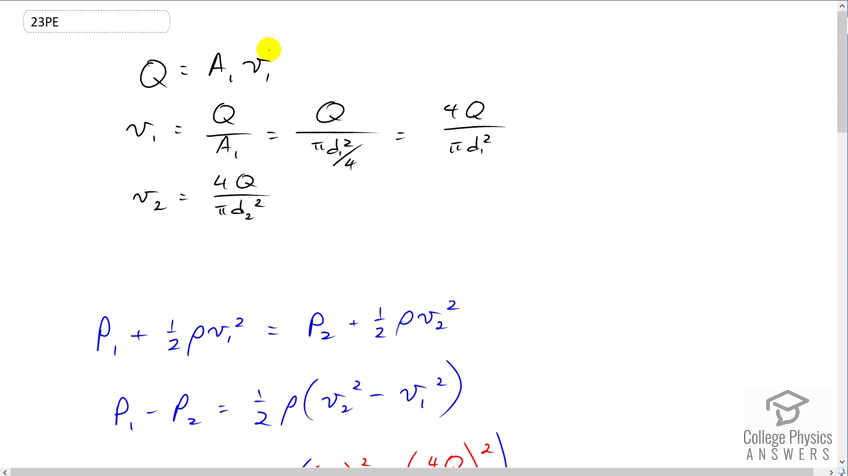 This is College Physics Answers with Shaun Dychko. The volume flow rate to reach section of the hose will be the same. So, that's going to be the cross-section area of the hose times its speed. So, in the first section, we're going to have the flow rate divided by the first area which is <i>Q</i> over Pi <i>d1</i> squared over four which is four <i>Q</i> over Pi <i>d1</i> squared. And then, in the second case it's going to be the same story but it's going to have a diameter two instead at the bottom. So, we are going to find the pressure difference between the two sections. And so in the first case, we have <i>P</i> pressure one plus one half times density of the water times the initial speed squared equals pressure two plus one half density of water times speed two squared. And then we can subtract the <i>P2</i> from both sides. And then also subtract one half <i>rho V1</i> squared from both sides. And now we got the pressure difference which we want to find is one half <i>rho</i> times the difference in the squares and the velocities where I factored out one half <i>rho</i> as a common factor between these two terms that are here. And then, we substitute in this expression for the velocity of the fluid that we found before. So we have four <i>Q</i> over Pi <i>d2</i> squared is speed <i>V2</i> and that itself is also squared. And then, for <i>V1</i> we have four <i>Q</i> over Pi <i>d1</i> squared. And then we square both <i>Vs</i> and terms and take out the common factor which will be 16 <i>Q</i> squared over Pi squared. But the 16 multiplied by half will make eight. And we'll be left with eight <i>rho</i> times <i>Q</i> squared over Pi squared. And then what's left over inside the bracket will be one over <i>d2</i> to the power of four because <i>d2</i> squared, and then that squared is squared. So that makes to the power of four there. And then minus one over <i>d1</i> to the power of four. So we have eight times a thousand kilograms per cubic meter density of water times 40 Liters per second, volume rate of flow converted into cubic meters per second by multiplying by one cubic meter for every thousand liters. And then we square that flow rate divide by Pi squared and then multiplied by one over three centimeters which 0.03 meters to the power four minus one over 0.09 meters to the power of four. And this gives 1.58 times ten to the six Pascals is the pressure difference between the two sections of the hose. And then, in part b, the second section of the hose is the nozzle. And the water is going to have some speed coming out of there. And this nozzle has this diameter that we know. And so we have this speed calculated up here. And formula for it, anyhow. And the Bernoulli's Equation for this opening in the nozzle which we'll call position two and then the final position of this water which is at the very top of its arc, that will be way up here somewhere, where it will have a speed of zero, its position three is speed of zero. And it will also have atmospheric pressure there. And in that case, this term is zero and <i>P2</i> also is going to be atmospheric pressure just at this opening of the nozzle. And so we can say that <i>P2</i> and <i>P3</i> are equal and so they make zero, we can subtract them from both sides. And we have whole bunch of terms that have just a common factor of <i>rho</i> in them. So we can divide every term by <i>rho</i>. So the rho factor disappears. So we have one half <i>V2</i> squared equals factoring out the common factor <i>g</i> from these two, we have times <i>hg</i> minus <i>h2</i>, where I subtracted <i>gh2</i> from both sides here. Kind of did a few things at once here, hopefully it's not so hard to follow. And then, while we want to know what's this difference in height is and so divide both sides by <i>g</i> and you get <i>h3</i> minus <i>h2</i> which is the change in height of the water, which is in other words, how high above the nozzle it goes is <i>V2</i> squared over two <i>g</i>. and then <i>V2</i> is four cube over Pi <i>d2</i> squared. As we figure out way over here, this works out to eight <i>Q</i> squared over Pi squared <i>gd2</i> the power of four. So that's eight times 40 liters per second converted into cubic meters per second and square that, divided by Pi squared times 9.81 meters per second squared times 0.0300 meters to the power of four. This gives 163 meters as the maximum height of the water.

Solutions for problems in chapter 12