Skip to main content
Change the chapter
Question
A student was changing one of the dimensions of a square parallel plate capacitor and measuring the resultant charge in a circuit with a battery. However, the student forgot which dimension was being varied, and didn’t write it or any units down. Given the table, which dimension was it?
Question by OpenStax is licensed under CC BY 4.0.
Final Answer 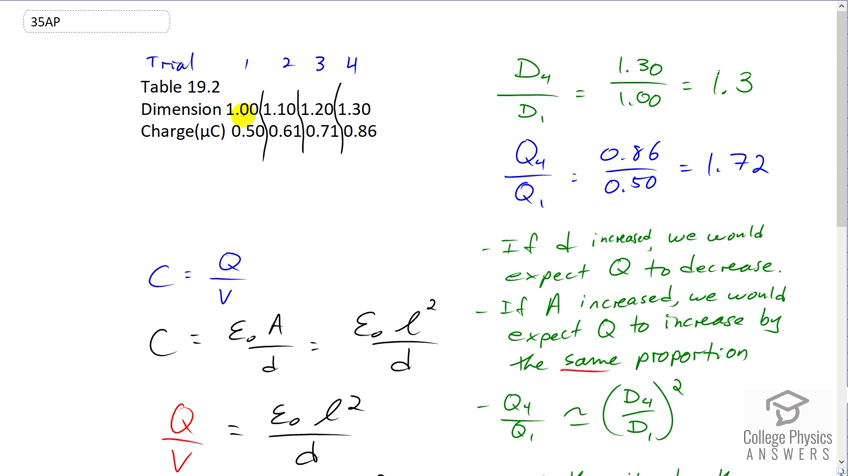 Start My Free Week
View sample solution
Video Transcript
This is College Physics Answers with Shaun Dychko.  We have this data table showing some dimension and how the amount of charge accumulated in the capacitor changes as the dimension changes. And, we don't know what this dimension is, and we'll have to figure out what it is based on the proportions by which the dimension changes and then the charge changes. So, I've taken dimension in trial four divided by the dimension in trial one, which is 1.3 divided by one, and we get a proportion of 1.3. So, This dimension in trial four is 1.3 times the dimension in trial one. Now, for the charge, in trial four is 0.86, and we divide that by the charge in trial one, 0.50, we get 1.72. Now, this isn't all we need to know to answer our question, but it's definitely going to help. We can then figure out what the possibilities are for answering this question based on making an expression for charge based on all the things in this question. So, we know that capacitance is charge divided by voltage. We know that we're dealing with a parallel plate capacitor, and so capacitance is also permittivity of free space times the area of a plate divided by the separation. And, being a square plate capacitor, the area is the side length squared. And so, we can equate these two because they're both equal to the same thing capacitance. And, we'll say that Q over V is Epsilon naught L squared over D. And then, we'll multiply both sides by V to get an expression for Q. So, Q varies linearly with voltage. It varies with the square of the side length, or linearly with area, if you like, and inversely proportional to the separation between the plates. So now if we look at our possibilities here, we can go through them one at a time and see what works. If we consider option A, maybe the distance between the plates was being varied for this dimension. If that was true, we would expect the amount the amount of charge to decrease as the distance between the plate increases. And so, we would expect this proportion to be less than one. That's not the case. And so, we can exclude option A. Now, option B says, maybe the dimension is the area. Well, if the area increased, if this was representing area, we would expect Q to increase by the same proportion, because we could instead replace this with area, that's what L squared is, and Q is directly proportional to the area. And so, if this represented area had increased by 1.3 times, we would expect the charge to also increase by 1.3 times. But, that's not the case. That's why we can exclude the idea that this is area. So, that leaves only, well, we can talk about voltage, maybe, but is that one of our options? No. It's not an option. We can consider option C now. Now, that says that the length is being varied by this dimension. And, that works because we can see that 1.3 squared is 1.72. Pretty close, I think it's 1.71 or so, so that's close enough. And so, because that's true, this proportion by which the charge changes is the square of the proportion by which the dimension changes. That means, it must be the side length that is changing and being measured by that dimension. And so, the answer is C.