Skip to main content
Advanced search
Question
The far point of a myopic administrator is 50.0 cm. (a) What is the relaxed power of his eyes? (b) If he has the normal 8.00% ability to accommodate, what is the closest object he can see clearly?
Question by OpenStax is licensed under CC BY 4.0.
Final Answer
16.2 cm
Solution Video 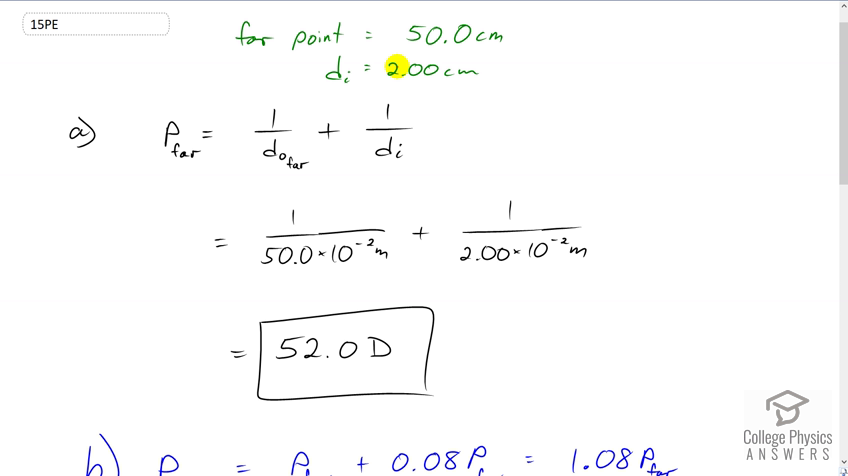 Video Transcript
This is College Physics Answers with Shaun Dychko. This myopic administrator has a far point of 50 centimeters and we know their image distance is two centimeters because that is the distance between the lens and the retina. The first question asks us to find the power of their eye when looking at something at their far point and that will be the reciprocal of the object distance at the far point, which is 50 centimeters, plus one over the image distance. So, we have one over 50 times ten to the minus two meters plus one over two centimeters written as times ten to the minus two meters, giving us a power of 52.0 diopters. Now, this person has a normal ability to accommodate, which means they can add eight percent to the power of their eye at the far point when looking at something close. So, their power when looking at something close, then, is going to be the far point power times 1.08, and that's going to be 56.16 diopters. And so, based on that, we can figure out what is this object distance when at the near point. Maybe I should have called this P near instead of P close, but in any case it's the same idea. So, we have the close power is one over the object distance when something is really close plus one over image distance. And so, we're solving for Do here, and so we'll subtract one over Di  from both sides and then switch the sides around. And then, take both sides to the power of negative one to solve for the object distance when something's really close. So, that will be the power when something is close minus one over the image distance all to the negative one. That's 56.16 diopters minus one over 2 centimeters written as times ten to the minus two meters all to the negative one, giving a close object distance of 16.2 centimeters. Now, this is their near point and it's a lot closer than the average person's eyesight so, a normal near point is 25 centimeters. So, this person has the advantage of being able to see things even closer, which will make the image on their retina bigger and they will see more detail. So, that's sort of the positive trait off of this myopic deficiency.