Skip to main content
Change the chapter
Question
(a) During laser vision correction, a brief burst of 193 nm ultraviolet light is projected onto the cornea of the patient. It makes a spot 1.00 mm in diameter and deposits 0.500 mJ of energy. Calculate the depth of the layer ablated, assuming the corneal tissue has the same properties as water and is initially at $34.0^\circ\textrm{C}$. The tissue’s temperature is increased to $100^\circ\textrm{C}$ and evaporated without further temperature increase. (b) Does your answer imply that the shape of the cornea can be finely controlled?
Question by OpenStax is licensed under CC BY 4.0.
Final Answer
Solution Video 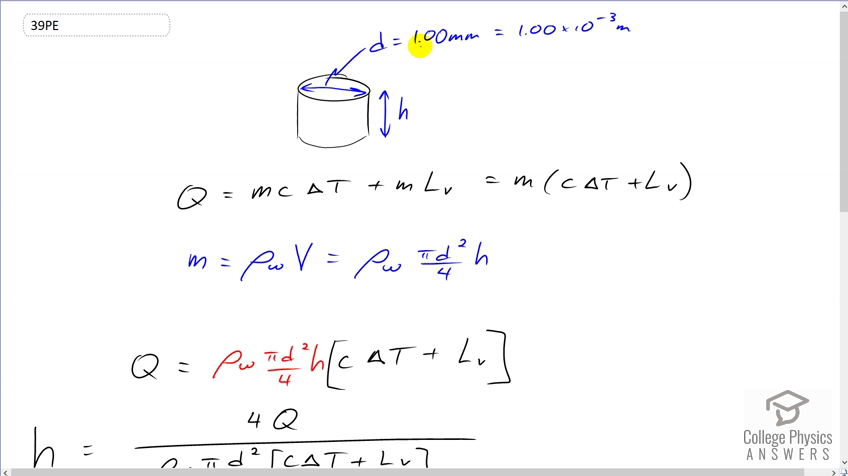 This is College Physics Answers with Shaun Dychko. An excimer laser used to do LASIK surgery on a person's cornea has a one millimeter diameter in the beam. And, it's going to ablate a certain volume of corneal material here, a certain amount of tissue in the cornea. And the question is, to what depth will this ablation occur? And, we're given the amount of energy that the laser deposits in the material and if it heats it up to the boiling point of water and then additionally adds the latent heat of vaporization energy to it, then it boils away. So basically, this laser is boiling away the material, the tissue, in the cornea. So, the heat energy added to this tissue is going to be the heat energy needed to raise its temperature from 34 degrees to 100 degrees Celsius. And then also, it needs to provide the heat of vaporization, which will be the mass times the latent heat of vaporization before the material, which is what we're considering to be water. And, we can factor out the <i>M<i/> there, so we have <i>Q<i/> is <i>M<i/> times specific heat capacity of water times the change of temperature plus the latent heat of vaporization. So, the height is what we want, but the mass is what appears in this formula. And so, we need to express our mass in terms of this height. So, the mass will be the density of this tissue, which is the density of water multiplied by its volume. And, this is a cylinder, and so the volume is going to be pi times the radius squared, or the diameter divided by two squared, which ends up being diameter squared over four. And, this area of the circular top of the cylinder multiplied by the height <i>H</i> is the volume. And that, times the density, gives us the mass. So, we can substitute this in for mass and we get that <i>Q</i> is then the density times pi times diameter of the laser spot squared over four times the depth of the ablation. And, multiplied by specific heat capacity times change in temperature plus latent heat of vaporization. And, we're going to solve this for <i>H<i/> by dividing both sides by everything except for the four, which we multiply both sides by. And, we end up with the height then, or the depth, that the laser penetrates is going to be four times the amount of heat deposited divided by density times pi times diameter of the laser spots squared times specific heat capacity times change in temperature plus latent heat of vaporization. So, plug all the numbers in and we get our answer. So, that's four times 0.50 milliJoules, which is written as times ten to the minus three Joules, divided by the density, which is 1000 kilograms per cubic meter for water, times pi times one millimeter written as times ten to the minus three meters squared, and then times by 4186 Joules per kilogram per Celsius degree, latent or a specific heat of water, times the change in temperature, which is a final temperature of 100 degrees Celsius minus initial temperature of 34 degrees Celsius. There is no need to change these into Kelvin, although you could have, because the difference in Celsius degrees will be the same as the difference in Kelvin. And then, add to this the latent heat of vaporization for water, which is 2.256 times ten to the six Joules per kilogram. And, we end up with 0.251 micrometers. So, one pulse of this excimer laser will ablate a material to a depth of 0.251 micrometers. And so, that's very good granularity. And, the shape of the cornea can be finely controlled since each pulse removes only a very small amount of tissue.