Skip to main content
Advanced search
Question
A boy has a near point of 50 cm and a far point of 500 cm. Will a -4.00 D lens correct his far point to infinity?
Question by OpenStax is licensed under CC BY 4.0.
Final Answer
Solution Video 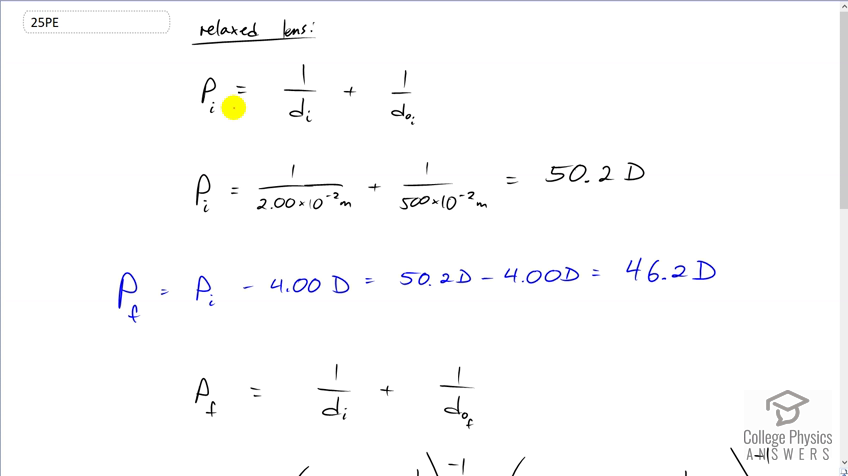 Video Transcript
This is College Physics Answers with Shaun Dychko. A boy has a far point of 500 centimeters and the question is by reducing the power of their eyes by four diopters, will their far point then be infinity, which would be normal vision. So, let's figure out the power that they have initially. So, that's one over the image distance which is between their eyeball lens and the retina, which is two centimeters, and then add to that one over the initial object distance. And, we'll get an initial power uncorrected, which is one over two centimeters written as times ten to the minus two meters plus one over 500 centimeters, which is 50.2 diopters. Now, their final power then is going to be that initial power minus four diopters. That's 50.2 minus four, which is 46.2 diopters. And, let's figure out what the object distance will be with this power. And so, we have the same one over Di in this case, there's no need for a subscript F for a final here because this is the lens retina distance that doesn't change. But, there is a subscript F here on the object distance and a new final power. So, the object distance is going to be the final power minus one over the image distance all to the power of negative one because we'll subtract one over Di from both sides. And then, raise both sides to the exponent negative one and we get this line here. So, that's 46.2 diopters minus one over two centimeters all to the power of negative one, which is negative 0.263 meters. Now, this is nonsensical because with a negative number there, that means that the object should be behind the eyeball, which doesn't make sense. And so, this lens overcorrects and the power should be less.