Skip to main content
Change the chapter
Question
Verify the units obtained for magnetic field strength $B$ in Example 24.1 (using the equation $B = \dfrac{E}{c}$) are in fact teslas (T).
Question by OpenStax is licensed under CC BY 4.0.
Final Answer

please refer to the solution video. 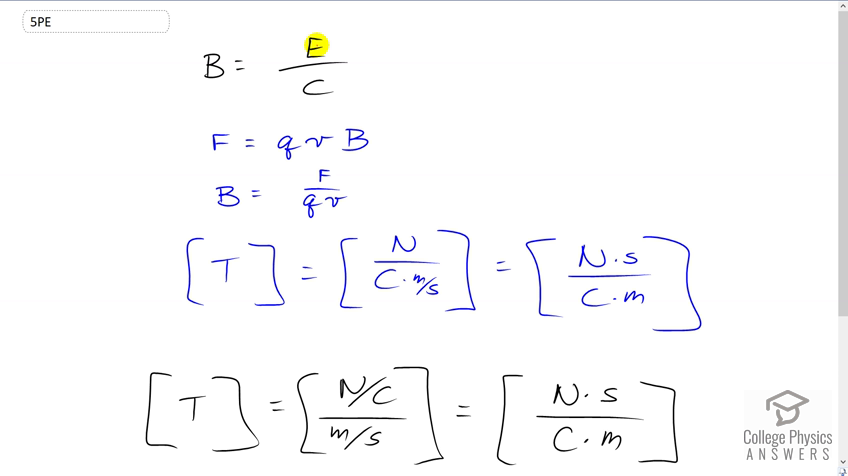 This is College Physics Answers with Shaun Dychko. We're going to show that when we take electric field strength and divide it by the speed of light, we're going to end up with units that are Teslas. So, we need to first of all figure out what are some more base units that Teslas could be. And so, here's a formula that I remember involving magnetic field and some other things that have units that are easier to understand. So we can solve for <i>B</i>, and it's force divided by charge in coulombs times its speed. So, this is the force on a moving charge in the presence of a magnetic field. So with this, we can say that a Tesla, which is what of course the magnetic field will be, has units of Newtons because that's what force is, divided by coulombs, which are the units of charge, times meter per second, which is the units of speed. And then we can multiply top and bottom by seconds, and these seconds cancel, giving us Newton-seconds per coulomb-meter. And then, when we consider this equation, its dimensions would have Tesla here. And that equals, Newtons per coulomb (because that's the units of electric field) divided by meters per second (because that's the units of speed of light) and this works out to Newton-seconds per coulomb-meter as well because you can multiply top and bottom by <i>s</i>, and then multiply top and bottom by coulombs as well. So the coulombs will cancel on the top and then it will appear on the bottom. And the seconds will cancel on the bottom, and will appear on the top. And so, because Tesla turns into Newton-seconds per coulomb-meter in both cases, that means these are the same. And so, we've shown that this formula gives us the units that we expected given this formula here for Tesla.