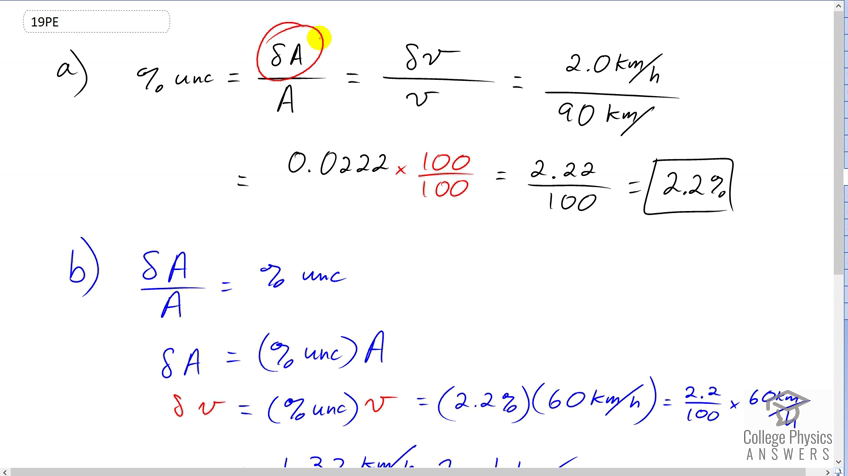 This is College Physics Answers with Shaun Dychko Percent uncertainty in the measurement is the amount by which that measurement could vary from what it truly is. This true value that we can never know divided by the measurement itself. So, we have an estimate in our uncertainty of two kilometers per hour, and so we divide that by ninety kilometers per hour to get our percent uncertainty. Where I've, you know, I've written the formula with the letter <i>A</i> here since that's what the formula shows in your textbook. And then, written it with <i>v</i>s in this part here because that's what we're dealing with in this question is speeds or velocities. And so, we have .0222. It is this fraction. Now, we're going to convert that into a percent by multiplying by 100 over 100, which might be a different way than you've seen to convert to percent, I mean, the quick answer for how to convert a number into a percent is to multiply it by hundred, but this is kind of why. We're multiplying by the number 1, which is what 100 divided by 100 is and that's why we're allowed to do it because you can multiply anything by 1. It doesn't change the quantity. It only changes how it looks. And so, on the top, we have .022 times a 100 which makes 2.22, and on the bottom, we have 100 there multiplied by the assumed 1 which is below any number like that. And so, we have 2.22 over a 100 and the fraction 1 over a 100 is the symbol %. Percent means 'times by 1 over a 100' or divided by a 100 in other words. Okay. So, that's sort of the long answer for how to convert the decimal into a percent but multiply it by a hundred and put the percent sign there is the short answer. Then... So, we have 2.2% uncertainty and we have two significant figures there. I guess because there's two significant figures in our speed, let's assume. We'll presume that this zero is significant although we can't really be sure in the way it's written. And sometimes, nevertheless, I would still have one significant figure in the percent uncertainty just because uncertainties are by their nature not really well known and so they can't be very precise. But sometimes, two significant figures is fine. But I would... you'd probably never see 3. So, then in part B, we're asked, you know, suppose the car goes at 60 kilometers per hour, what is the range of possible speeds given the percent uncertainty we've calculated in Part A. So, here's the formula from the textbook. And we're going to rearrange it to solve for this absolute uncertainty and we will multiply both sides by <i>A</i> so that it cancels on the left side, leaving us with Delta <i>A</i> equals percent uncertainty times the measurement and then substituting in <i>v</i>s because that's what we're dealing with in this question. So, we have 2.2% uncertainty times 60 kilometers per hour and that 2.2% can be written as 2 over a 100 as any percent can be, over a 100, and then times by 60 and that gives 1.32 kilometers per hour, and we're going to round that to the ones place here and we're doing things a little bit differently. We're not going to have two significant figures in this and so for Part B, even though we did for a part A, because this is a number that we are going to add and subtract to our speed, and when you're adding or subtracting, then the rule is that your answer to the addition or subtraction can be only as precise as the least precise number that you're adding or subtracting. So, since we have the number 60, which is precise to the ones place. That means our answer can only ever be precise to the ones place at best, and so this number, even if we had 1.3 here, we would still have to round it to 59, because we're adding this number to 60 and 60 is precise to the ones place. And likewise, you know we have 61 over here precise only to the ones place. So, when you're adding or subtracting, by the way, you don't count the number of significant figures the way you do with multiplying and dividing. Instead, we're considering the precision of our numbers or another or to put it in different words, we're considering the decimal places. And we're looking at which digit is the most precise digit in our least precise number. So, in this case, there's a tie. Both this number and this number are precise to the ones place, and so our answer can only be as precise as the ones place. 59 to 60 kilometers per hour is the answer for the range of possible speeds.

where are you getting 2.0km/h from?

Thank you so much for asking this question cayleenrizo1. The "2.0 km/h" didn't come through in the copy-paste from the textbook. I've updated the question.

In reply to where are you getting 2.0km… by cayleenrizo1